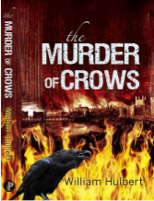 In the 1960s in The Yelde Hall in Chippenham (then the Town’s museum) local author William Hulbert first heard the allegation, in an old style photo booth, that John Woodman had plotted the Fire of London. Over 40 years and much research later he has published his book The Murder of Crows.

Several local Chippenham landmarks appear in The Murder of Crows. The Lyon Inn where John Woodman is alleged to have plotted the Fire still exists, but is today The Magpie Shop and the complex is intriguingly called the London Buildings.  Other local landmarks that appear in the book are The Yelde Hall and its accompanying Blindroom. The Yelde Hall is over 500 hundred years old and in its time has been a court house and main civic meeting place. Upstairs was a Council Chamber where the Bailiff and Burgesses held town council meetings – a council meeting scene with mannequins can now be viewed in this area. The Yelde Hall has also been used as a bank, armoury, Fire Station, Tourist Information and the Town Museum.

Two characters from the book are imprisoned in the Blindroom (the town’s lock up). It’s still possible to go into the Blindroom and imagine the helplessness felt by its inmates.  Other local landmarks that feature in the book are The Bear Inn and the now demolished Bull Inn; that site now houses WH Smith – the impressive Smith’s doorway being the original passage way for coaches into the Inn.  The characters pass through Yatton Keynell where they rest on the wall of St Margaret’s church as well as spying a rather ominous 97 miles to Hyde Park Corner sign.

The characters eventually set off from Chippenham and head towards London, but along the way their journey is fraught with a variety of trials and tribulations.  After the Fire of London the authorities issued a warrant for Woodman’s arrest, but he had disappeared; allegedly fleeing the country. Hulbert has come up with an interesting twist as to Woodman’s fate.

The Murder of Crows contains much researched fact as well as fiction.  Readers can follow the route taken by the leading characters in two ways: either by using five maps that are contained in the book, or through Wil’s website mpnw.50webs.com which in addition to containing the maps also has a series of photographs, many of which are in Wiltshire and the Chippenham area. It is therefore possible to metaphorically as well as literally follow the characters journey from West Yatton Down, to Chippenham, Silbury Hill, Avebury, Berkshire and on into London.

West Yatton, near Castle Combe is now a nature reserve managed by Wiltshire Trust and accessible to the public. The area is less than forty acres in size and is a site of special scientific interest (SSSI). It can be reached from the A420 four miles south of Chippenham (heading towards Bath). You need to turn onto a minor road opposite ‘The Crown Inn’ signposted to West Yatton. Continue along this narrow track for about a mile until you come to a black and white signpost for Long Dean, just after this signpost there is parking space for four to five cars on an embankment on the left hand side of the road. West Yatton Down is on the opposite side of the road and is accessed through a gate. The area consists of a valley with very steep sided slopes. Through the middle runs a sparkling stream, but in Summer this tributary of the By Brook, often dries up. The Down has an abundance of flower and fauna including several species of orchids, deer, rabbits, weasels and a variety of butterflies.

The Murder of Crows by William Hulbert is available on Amazon paperback (£12.99) or Kindle (£4.00). It is also available locally from Magpie (Market Place), Chippenham Museum and Heritage Centre and The Corsham Bookshop.

Although aimed at the adult market the Kindle version rose to number 1 in Amazon’s bestsellers young adults and teenagers sci-fi alien section within four days of its release, and has also featured highly in the historical fiction section.