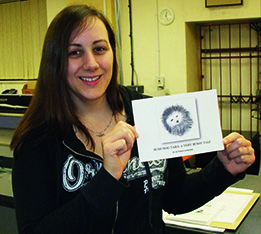 Bush-hog Tails is a story about a lovable new kind of creature. From the first sighting of the little Bush-hog he can often be mistaken as a hedgehog, but this cute thing is in fact nothing like a hedgehog! He is smaller, extremely clever, can speak many languages and has metal spikes which only really come out if the Bush-hog is afraid.

Bushy meets a cat called Fluffy who attempts to eat him but soon comes to realise that it won’t be that easy! So instead they become good friends and embark on many adventures together, meeting other animals and making new friends.

The author, Victoria Harwood, hopes that the characters touch the hearts of both children and adults. Her stories have magic, animal education and humour included in the hope that they will delight and inspire children, keeping them enchanted by the mishaps of the characters.

Victoria has drawn all the illustrations using
charcoal and crayon, carefully scanning them to avoid smudging ready for publication.

Victoria will be soon launching her second book which has the little Bush-hog discovering new and exciting things. Victoria hopes that this will become a series of books so that her love for animals and writing can continue to be shared with others for many years to come.

You can buy Victoria’s books on Ebay or via the nottinghambooks.co.uk website. Bush-hog Tails is also on Facebook where Victoria puts interesting and unusual animal facts, updates and events dates. She has just started a new comic strip too which is featured on her page. You can ask Victoria any question in regards to her books or her characters on Facebook or by contacting her directly on: lovebushhog@aol.co.uk