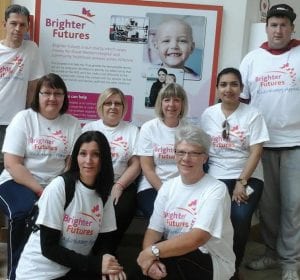 Some Sainsbury’s colleagues were left counting their blisters after a five mile walk in aid of Brighter Futures on Saturday, but the smiles at the end said it all. The Stratton store’s Charity of the Year is dedicated to raising money for a new radiotherapy unit at Great Western Hospital and it was from there that the merry crew set off at around 11am.

The route took them to Coate, up Queen’s Drive, along Oxford Road and back to the store, visiting two Arkell’s pubs on the way, the Sun Inn at Coate and the White Hart at Stratton, where, with the kind permission of both managers, sizeable additions to the fund were collected.

A tired but elated Trish Carter was among the returning heroes and was quick to praise her fellow walkers. ‘The spirit on the walk was first class,’ said the Charity Co-ordinator for the store, ‘Everyone was supporting everyone else and the generosity shown to the cause along the route, in the pubs and back at the store was amazing! We would like to give a big thanks to everyone that supported us.’

With lots of sponsorship monies still to come in it is too early to get a final amount raised at the event, but all signs suggest it will be a bumper figure.

It may have been a high blister count on the day, but all that hard work looks set to achieve an even higher donation count!