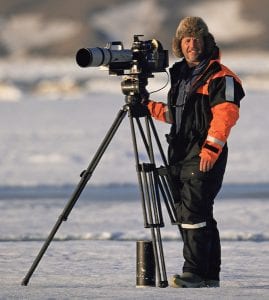 Doug’s work has featured in the popular BBC documentaries, Frozen Planet, Blue Planet, Ocean Giants in addition to being profiled on BBC1’s Wildlife Cameramen at Work. After a childhood love of diving he qualified as a Marine Biologist, and started his camera career soon after following a chance meeting with Sir David Attenborough in the Antarctic.  He has been filming for Attenborough and producing his own wildlife documentaries ever since, despite never having had a formal lesson in photography. He has also been awarded the Polar Medal twice by the Queen and has published his book of stills photography ‘Freeze Frame’.

His talk is hugely entertaining with tales of being pawed by Polar Bears to being dragged under water by a hungry Sea Lion as well as touching on more serious topics of the decline of the landscapes in Antarctica and our oceans’ Coral Reefs, he is very passionate about conservation. He also has lovely recollections to share of his time working with Sir David Attenborough in some of the most remote places on the planet.