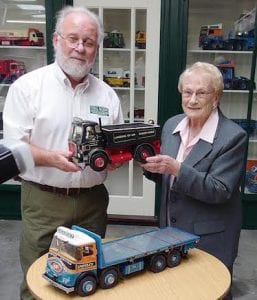 As a result of a telephone call back in January Michael Bennett and David Edwards, two Directors of the Atwell Wilson Motor Museum drove to Wolverhampton to meet Mrs Beryl Spittle, whose late husband Jack had built this wonderful collection of model lorries. Beryl had decided that she would like the collection displayed together and not split up or sold.

Jack was born in 1922 and started driving on the day war broke out in 1939, but did not have to take a driving test. He drove a lorry for his parents and later worked for Goodyear Tyres and Ever Ready Batteries before starting up his own business, Spittles Transport. Suffering from arthritis of the spine he was told to give up driving and retired aged 57. He then spent the next 30 years making these models and was so busy with them that he didn’t have time for holidays. Jack purchased two vintage lorries and would travel to shows within a 50 mile radius of Wolverhampton proudly displaying the models laid out on the flat bed of one of these lorries.

Beryl visited the Museum early in March and in mid April her good friend Val telephoned to say that Beryl was more than happy to donate the whole collection to us.

On Saturday September 19th Beryl once again visited the Museum to formally hand over the collection.