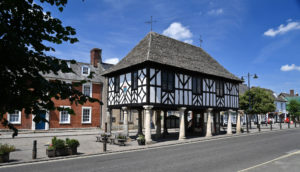 On 12 March 2011, the market town of Wootton Bassett in Wiltshire, South West England, was granted a royal title by Queen Elizabeth II, thereby holding the unique distinction of being the only England town to be bestowed with this royal favour since 1909. Indeed, it is one of only three towns to actually carry the designation, the other two being Royal Leamington Spa and Royal Tunbridge Wells.

Situated 6 miles from the busy commuter town of Swindon, Wootton Bassett is first mentioned in a 681 AD charter as being in the possession of the Abbot of nearby Malmesbury Abbey. Wootton Bassett was then known as Wodeton or ‘settlement in the wood’ in reference to neighbouring Bradon Forest. Malmesbury and surrounding areas such as Wodeton rose to particular prominence when King Æthelstan (924-939 AD) based his court there. Indeed, whilst London was the country’s commercial centre, Malmesbury became the religious and academic centre of learning in England at the time.

With little in the way of conflict or drama for nearly 100 years, Wodeton found itself under siege in 1015 when the Danish Vikings violently conquered much of the British Isles.
Or as Wulfstan II, the Archbishop of York cheerfully put it; the Vikings became “God’s judgement on England”! Those who survived the onslaught made the wise decision to move the settlement further uphill, where the town’s High Street remains today. In the wake of the 1066 Norman Conquest, the town was recorded in William I’s famous survey of 1086, the Domesday Book, (the ‘book of judgement’ for English and Welsh taxpayers at the time). Wootton Bassett was said to belong to the prominent Norman landowner Miles Crispin and was worth the princely sum of nine pounds.

Despite its modest size, Wootton Bassett was granted borough status by Henry VI in the mid-15th century. By 1831, there were around 1,500 people living in 349 dwellings in the town, which meant the electorate was small enough (and very willing!) to be bribed for votes by prominent local landowners who could then gain an unfair advantage within the House of Commons. Since the town boasted no major industry or trade links at the time and had high levels of unemployment, this very undemocratic voting system was a popular side-line and vast sums of money (and beer!) changed hands. In the wake of the Reform Act 1832, Wootton Bassett and other ‘Rotten Boroughs’ as they were known, had its borough constituency abolished and became part of the nearby Cricklade constituency.

Having always been a modest market town with a focus on farming and agriculture, the population of Wotton Bassett tripled in size between the 1960s and 2001 with the construction of the M4 motorway linking London to South Wales. This made the town an attractive proposition to those commuting to the capital, Swindon, Bath and Bristol. The town was also popular with the Royal Air Force following the establishment of the nearby RAF Lyneham base in 1940, which went on to become the RAF’s principal transfer point when it became home to the military transport aircraft, the C-130 Hercules, in 1971.

In early 2007, maintenance at the RAF Brize Norton base in Oxfordshire meant that the bodies of British Armed Forces servicemen and women who had lost their lives in Iraq and Afghanistan were returned home to RAF Lyneham. The drive from the base to the John Radcliffe Hospital in Oxford, where the bodies were received by their families, took the cortege along Wootton Basset
High Street.

When the town’s branch of The Royal British Legion found out about the detour, they began to line the streets to pay their respect to the fallen soldiers, encouraging other local people to do the same. Hundreds and sometimes thousands of people began to line the route, and when the repairs to Brize Norton were complete the RAF made the decision to keep using RAF Lyneham for the transfer because of the massive demonstration of support shown by the people of Wootton Bassett.