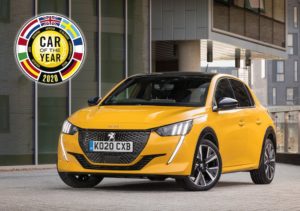 The all-new second generation Peugeot 208 has been crowned European Car of the Year.
Offered with both conventional petrol and diesel engines, as well as a 100% electric version (the e-208), the French supermini comfortably beat off a strong challenge from two all-electric newcomers – the Tesla Model 3 and Porsche Taycan.

Other finalists included the Renault Clio, Ford Puma, Toyota Corolla and BMW 1 Series.
The panel of 60 European journalists praised the 208’s powertrain range saying it providing buyers with “the power of choice”. Its bold design and technology were also singled out.