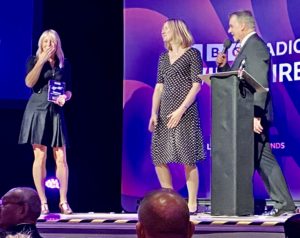 Calne based environmental group, River Warriors, was a named as a winner at the BBC Make a Difference awards that took place last night (Sunday 26 September) at the Corn Exchange in Devizes.

The BBC Make a Difference awards are a way to say thank you and show recognition and appreciation for people who love to make life better for others. Winners are selected by a panel of judges and awards are given in each of the 8 categories across each local BBC radio station.

Rivers Warriors is an organisation that helps and supports the local community, encourages and supports wildlife, protects the environment and promote a more conscientious attitude towards nature and the town. The group is organised by Tamzyn Long, who is supported by a team of volunteers made up of residents of all ages.

The River Warriors were nominated in the environment category of the Make a Difference Award earlier this year. The judging panel has been to talk with members of the group several times through the year and see them hard at work on projects around the town. Presenters from BBC Radio Wiltshire have also joined in with working parties and seen the group’s work first hand.

Tamzyn Long accepted the Make a Difference Award on behalf of the River Warriors. She was congratulated by the Director General of the BBC, Tim Davie CBE who said he had enjoyed hearing about the River Warriors’ story and that the award was well deserved. Tamzyn said, “This award is a real honour. I would like to thank all of the volunteers, both adults and children, who come along, work really hard and enjoy what we are doing for our town”.

Steve Nash, Director of Services at Calne Town Council said, “It is fantastic news that River Warriors has won this award and that the work of a local group whose mission is helping to support the environment for the local residents has been recognised.”

For more information you can contact Calne@calne.gov.uk or telephone the office on 01249 814000