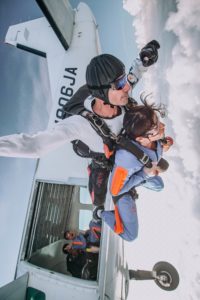 After experiencing emotional and psychological abuse, Rachael has worked hard to rebuild her life. Now she wants to give back to the organisation that first helped her, Splitz Support Service, by jumping 15,000ft from a plane in a sponsored tandem skydive.

Since the start of the year, Rachael has been focusing on rebuilding her life. After quitting her job, she decided to follow her passion of becoming a mental health support worker and threw herself into study, art therapy groups, addiction recovery groups, LGBTQ+ support groups and courses. After recently passing a Cache Level 2 Certificate in Awareness of Mental Health Problems with Kings College London, she’s successfully found a new full-time job helping people with leaning difficulties and mental health problems.

While many charities and organisations have helped Rachael during her recovery, she chose to support and fundraise for Splitz Support Service as they were the first organisation who helped her rebuild her life.

She said: “Splitz Support Service was the first charity I was signposted to after suffering emotional and psychological abuse over a period of months. I was referred to them by the police.
The aim of my skydive is to raise awareness not of my own experience but for others to help them speak out and know it is always helpful to seek support if they feel they are being manipulated.
No one should suffer in silence. Victims’ voices are the ones we need to hear from more to stop this kind of abuse from happening.
I hope the money I raise will help at least one person who is silenced. I also hope to raise awareness of Splitz Support Service as a charitable organisation that people can get help from.”
Splitz Support Service has been running for over 30 years and offers life changing support to people who have experienced abuse, sexual violence, and stalking. Every year they help over 10,000 adults and children living in Wiltshire, Gloucestershire, Bristol and Devon to rebuild their lives free from fear and to have the opportunity and skills to flourish in their future relationships.
The charity is encouraging members of the public and local businesses to take on a fundraising challenge to help them raise vital funds to continue its life saving work.
Jessica Gay, Head of Fundraising at Splitz Support Service said: “Every year we see more and more people and families needing our support. Last year, our referral numbers increased by more than 30%. With costs rising at incomprehensible rate, we know people are being forced to stay with their abuser through having no other option. Every penny counts in helping us to get people out of harm’s way, help them work through unimaginable traumas and support them in their recovery to rebuild a life free from fear and abuse.”