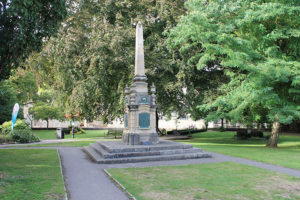 The Bradford on Avon war memorial is set to benefit from a grant from The War Memorials scheme supported by Historic England.

The 2022/23 grant funding will allow for the war memorial to be repaired and conserved to coincide with its 100th anniversary.

Standing proud in Westbury Garden, the war memorial was installed to commemorate the Great War.

There are two bronze tablets with the names of those who died in the Great War. One hundred and twenty five of them arranged alphabetically (Adams C.E to White W.) without rank or regiment.

After 98 years of standing the stone is weathered and deteriorating and Bradford on Avon Town Council has sought a refurbishment programme with support from the local Royal British Legion Poppy Appeal team.

The works will begin on Monday, 26 September and residents should expect to see scaffolding around the memorial. The memorial will also be fenced off.

Contractors will hand clean the recesses, repoint open and failed joints to steps and paving, and will carry out fine mortar repairs and repointing to any areas of delamination or soft beds of stone on carved detail.

Bradford on Avon’s contribution to both World Wars was complex both as an industrial town – manufacturing the Avon Rubber products for the war effort – and suffering losses from its small population.

Never formally affiliated with a military organisation, Bradford on Avon has nonetheless always regarded its war memorial as central to Remembrance Day.

Frances Moreton, Director, War Memorials Trust said, “War memorials connect us today to those who have given their lives in conflicts throughout history.

“Conserving them will ensure future generations can continue to pay their respects. War Memorials Trust was delighted to support this project and hopes it will ensure the war memorial remains a focal point for the community.

“Anyone concerned about any other war memorials that might need help should contact the charity, or if you believe it is important to preserve our war memorial heritage, please donate to help us sustain our work.”