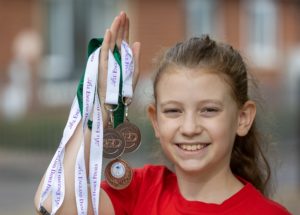 However, for Year 8 pupil Poppy who aspires to perform on Broadway, this isn’t the first time she’s represented the country on the national scale, but the third, having danced in the Tap World Championships in 2019, and also the Dance World Cup in Spain earlier this year, where she won silver.

Poppy has been dancing since the age of 2 and trains in tap, modern, lyrical, acro and commercial dance styles, although she prefers tap.  She explained: “Tap is my favourite style of dance; it’s really fun and I can just forget about everything and dance.

“I train with two different prestigious dance schools, Wootton Bassett School of Dance and Tap Attack in Swindon; I’m also on Team GB.  Competing at the world championships wasn’t very scary, I’ve got used to competitions and so they feel normal.”

Dancing is a big commitment for Poppy, but has become a way of life for her.  She continued: “My brother did dancing too, I liked watching it and so tried it.  At the moment I only have Fridays off, I train with Wootton Bassett in the week and then at the weekend I go to Tap Attack.  It’s good because it’s not just my age group training and competing, but also junior and adult and so I get inspired by seeing others.

“My mum wants me to go on Broadway, which would be very exciting but I need to do a lot of work and practice for that!”

Jason Tudor, Principal at Kingsbury Green Academy said: “Poppy’s achievements are very impressive, she has great passion and determination and always gives her all in everything she does.

“We have an impressive array of world-class medallists here at Kingsbury Green Academy, across a number of sports and interests, and we recognise the value that comes from helping our pupils to pursue these interests.”