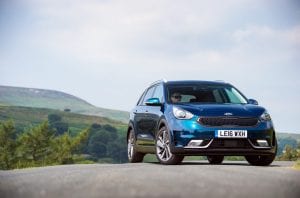 Hybrid vehicles are in vogue these days – or so it appears. Will this technology take over the conventional power plants we know one day? I don’t have the psychic wherewithal to tell you. But a lot of automakers seem to be following this trend – and now it’s Kia’s turn.

The all-new Kia Niro hybrid is propelled by an orthodox 1.6-litre GDi petrol engine, paired up with a 32kW electric motor. There’s also a lithium-ion polymer battery where energy is saved. This layout is like with the one in Toyota’s Prius, and manages an official combined mpg of up to 74.3mpg, alongside CO2 emissions starting from 88g/km.

The Niro is larger than its relative, the Cee’d, yet more pocket-sized than its other relation – the attractive and admired Sportage. The all-new Kia Niro is the South Korean car company’s first attempt at a hybrid crossover type of vehicle, but you wouldn’t know.

Sure, there are copied elements, such as white plastic adornments inside the cabin, especially around the inner door handles. These are, undoubtedly, inspired by Toyota, but you can let Kia off because every car manufacturer ‘makes use of’ ideas. It’s a fashion thing and, by its very nature, fashion is all about making certain you’re ‘down with the kids’ on the hottest style.

The new Kia Niro’s body is rectangular, but it’s not at all disagreeable. The Niro has a simple, fetching form, that has hints of Sport Utility Vehicle (SUV) about it. At the front, the Sportage’s genetic material comes through – most markedly around the headlights. What’s more, the rump of the all-new Niro is easy-on-the-eye, with a conventional tailgate decorated with touches of silver trim.

The all-new Kia Niro will seat four-adults comfortably, or five at a squeeze. The load area is a decent size – certainly large enough for a regular sized family’s needs. The steering wheel is pleasingly thick to grasp and the switchgear and dials are intuitive and clear to use. The only difference between the Niro and a conventionally powered car is an energy flow meter replacing the rev counter. There’s also a drivetrain pictorial showing the energy stream between the Kia Niro’s engine, battery and wheels.

On start-up, the all-new Kia Niro sounds like it’s not turned on. That’s because, as with all hybrids, the engine under the bonnet doesn’t cut in instantly. Instead of any tick-over sounds, you hear a chime, signifying that the Niro is running. It’s not long before the 105PS petrol powered unit makes its presence known, though.

On the road, the Niro delivers even-tempered performance, thanks to a six-cog automatic gearbox. And, while the Kia Niro is no out and out performer, the additional power the petrol engine receives from the electric motor is appreciable. The all-new Kia Niro also feels planted and deals with the straights contentedly. It’s only on more blemished B-road surfaces that the Niro’s firm suspension results in a bit of jitteriness. The Kia Niro has to have a stiff set-up, though, to cope with the extra heft of the hybrid assembly. Luckily, there’s a silver lining to every cloud and this firmness means that body lean is hardly noticeable in corners.