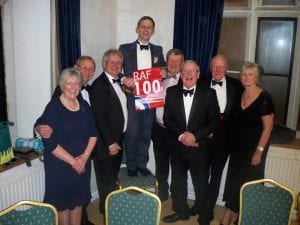 Nearly 100 current and former Royal Air Force personnel and their guests celebrated the 100th anniversary of the founding of the RAF on 1 st April, with a dinner in Malmesbury Town Hall.

Organised by former Hercules pilot Matt Cockram, who lives in Malmesbury, the total combined service of those attending amounted to 1,200 years. They included one who had achieved over 40 years’ service to a young technician with just four years in the RAF.

The evening began with a reception, followed by the dinner, provided by local Garsdon firm Manor Events and, after the Loyal Toast and speeches, concluded with entertainment from the Salisbury Big Band. Many who attended brought items of silver or souvenirs from their time in the RAF.

Matt Cockram commented: I’m delighted that so many former and current RAF personnel of all ranks, and their partners, supported the dinner. It was a great success and a wonderful evening, thanks to the excellent facilities at the Town Hall.”

Over £1,000 from the evening has been donated to the RAF Charitable Trust.

Looking for advertising in Wiltshire? Read more about our adverts and services here.