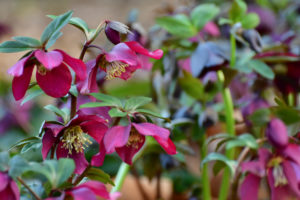 I fell in love with Hellebores a few years ago after an early spring visit to the Botanical Gardens in Cambridge where there are some beautiful displays. They provide a spring garden with elegant colour, and I admit to being quite excited when they appear.

They are poisonous plants so are probably best avoided if you have young children. They have a somewhat magical history. A mythological physician named Melampus was said to have observed the cathartic effect of hellebore on goats who munched on the plants. Melampus allegedly then used the milk of the same goats to cure the daughters of the King of Argos of their madness. The plant was used for its purgative properties into the Middle Ages and beyond. Personally, I would recommend growing them only for their attractiveness!

The original species originated in the northern parts of Greece and Turkey, but they grow incredibly well in British gardens. Having said that, I was disappointed when my first hellebore plants didn’t thrive initially. They seemed to succumb to disease quite easily. I subsequently learned this this was black rot. Then I heard Alan Titchmarsh’s advice to carefully cut the large fingered leaves from the plant at ground level in January, taking care not to damage the buds. This somewhat brutal treatment has worked a treat and my hellebores are now flourishing.

Hellebores like well-drained soil in sun or dappled shade. My clumps are happily increasing in size year-on-year. The stems shoot up to 25-30cm high between late January and February and the flowers appear at the top. Colours tend to be subtle: green-tinged white, yellow, oxblood red or dull purple but they glow in the more subdued light at this time of year. They would certainly appear washed-out in the bright sun of late spring and summer. The flowers are rich in nectar so provide food for early bees.

There are many varieties of hellebore, with single or double flowers. Just note that not all of them are easy to grow. I have struggled to get the Christmas Rose Helleborus niger to survive, never mind flower, but I’ve had much more success with the Green hellebore, Helleborus viridis, the pretty pink Lenten rose Helleborus x hybridus, which self-seeds quite nicely, and also the Helleborus x hybridus Ashwood Garden hybrids, which come in a variety of colours but don’t seem to self-seed as freely, at least in my garden.

Dig in plenty of mushroom compost before planting, and mulch after you’ve cut the leaves off.  Dust with a blood, bone and fishmeal mix after flowering and mulch again with well-rotted leaf mould or compost. Dig up any small self-seeded plants and use them as gifts, or to increase your own colony.