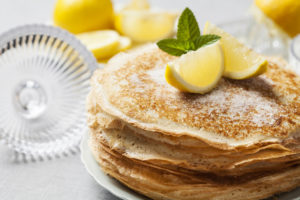 I grew up near Olney, in Buckinghamshire. It’s a pretty little town with lots of lovely independent shops and a strange claim to fame; it is the home of the pancake race.

On Shrove Tuesday, in a 500-year-old tradition, many of the Olney women (and the odd bloke in a dress), don aprons and head coverings, and race through the streets to the church tossing a hot pancake in a frying pan!

It’s an entertaining afternoon, but how did it all come about?

Legend has it that in 1455 a woman cooking pancakes heard the shriving bell summoning her to confession. In her Christian haste she ran to the church, wearing her apron and still clutching her frying pan, complete with hot pancake, and so the tradition was born.

The reason this 15th Century woman was cooking pancakes in the first place was due to a Christian dictate; that through the 40 days of Lent no person should eat milk, eggs, or butter.

This was a pre-fridge era, which meant that if a housewife had stocks of these foods they would go off before the fast ended on Easter Sunday, so she had to use them up. The solution was to make pancakes and they became a symbol of self-indulgence before the fast. Indeed Mardi Gras, as the ritual is called in France and the USA, literally translates as ‘Fat Tuesday.’

Over the years I’ve tried my pancakes with fruit, maple syrup, and a variety of savoury fillings but I keep coming back to fresh lemon juice and a sprinkling of sugar…irresistible.

Here is my own recipe for perfect pancakes.

Caster or Demerara sugar to taste.

To make the batter: sift the flour and salt into a large mixing bowl and make a well in the centre. Beat in the egg and a little of the milk until smooth. Gradually beat in the remaining milk and add 4 tablespoons of the melted butter. Cover the bowl and leave to stand for one hour.

In a small non-stick frying pan heat some of the butter until sizzling, but taking care not to let it burn. Pour enough batter into the pan to coat the base evenly. Cook over a moderate heat until the pancake is light golden-brown underneath and looks dry on top. Flip over (try to do this with style!) and cook the other side until golden. Continue until all the batter is used. The recipe should make 10-12 pancakes.

You can keep the pancakes warm in the oven (Gas mark 1 / 140C) until they are all cooked, but in our house they’re barely out the frying pan before they’re scoffed.

Serve with the lemon juice and sugar…Enjoy!