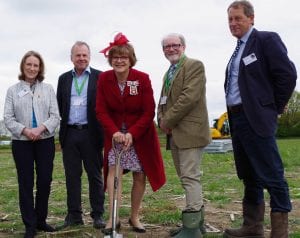 The exciting milestone co-incides with the charity’s Airbase Appeal raising over £251,000, meaning that just under £1 million is needed to complete the building and equipping of the new airbase.

“Its central location of Semington means the helicopter can still reach all parts of the county in 11 minutes, as they have been able to from Devizes Police HQ. The charity still needs to raise further funds to finish the project. My grateful thanks go to those who have generously contributed so far, and I would like to encourage further public support for this vital service in our county.”

Lauren Booth is a Champion Para-Cyclist and a member of the British Cycling Academy. Her ambition is to compete for Great Britain at the 2020 Paralympics in Tokyo.

Lauren said: “I’m so proud to be an Ambassador for Wiltshire Air Ambulance, it provides an amazing lifesaving service. They cover such a large area and the helicopter is able to get to incidents within minutes.  A new, modern airbase bringing together the operational crew and the Charity Team staff can only improve the service.”

Suzanna Hext was airlifted by Wiltshire Air Ambulance in July 2012 after a horse riding accident at Marston Meysey. She suffered serious injuries and after a lengthy spell of treatment she now competes at an advanced level in para and able-bodied dressage and has won national and international titles in para dressage. Her goal is to be selected to compete for Great Britain at the 2020 Paralympics in Tokyo.

Suzanna, who lives near Sherston, said: “I’m hugely honoured to have been asked to become an Ambassador for Wiltshire Air Ambulance to help to raise the charity’s profile and with their fundraising, including for the Airbase Appeal. The new airbase is crucial to Wiltshire Air Ambulance’s future and the charity needs the public’s support to raise the remaining funds to make it a reality.

“Wiltshire Air Ambulance is a vital service that we couldn’t do without, especially in rural locations such as where I had my horse riding accident. Due to the severity of my injuries, I needed the quickest response and Wiltshire Air Ambulance provided that. If they hadn’t got me to hospital quickly, the outcome could have been different.”

Nick and Annette Mason, who live in Corsham, are supporting the Airbase Appeal by holding an open garden event at their house on 10 and 11 June 2017 in aid of the appeal and The Wiltshire Bobby Van Trust.

Nick is a founding member of the band Pink Floyd, and his wife, Annette, is an aviation correspondent and an actress. They are both accomplished helicopter pilots.

They said: “We have lived in Wiltshire for over 20 years and we are enormously keen supporters of Wiltshire Air Ambulance, both from the point of view of knowing people who have benefitted from the service but also because both of us are enthusiastic pilots ourselves. The new airbase will be a brilliant facility, enabling this wonderful charity to carry on its vital, lifesaving work.”

Chris Lear, Chairman of Wiltshire Air Ambulance, said: “We launched our major fundraising appeal for our new airbase just three months ago and the response has been excellent. Thanks to the generosity of individuals, community groups, schools, businesses and grant making trusts, we are well on the way to raising the £1.25 million we need to complete the building and equipping of the airbase.

“Now that the building work is underway on the airbase it’s more important than ever to support the appeal and raise the remaining funds to enable us to secure the future of our lifesaving service. There are lots of ways that you can get involved. Have a look at our special website for ideas – www.wiltshireairbaseappeal.co.uk – or call the Charity Team on 01380 739453 or email hello@wiltshireairambulance.co.uk”.

Rigg Construction (Southern) Limited, based in Bowerhill, Melksham, is the primary contractor for the building of the new airbase, which will bring together the charity’s helicopter, aircrew and charity team. Currently the helicopter and aircrew are based at a hangar at Police Headquarters in Devizes while the charity team is based at offices in Calne.