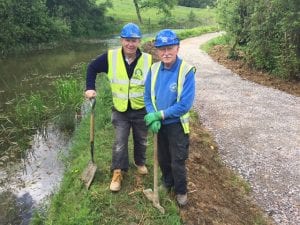 Hardworking volunteers have completed the latest improvements to a restored stretch of canal between Chippenham and Lacock.
The Wilts & Berks Canal Trust has finished raising a section of towpath which dropped when the waterway was abandoned more than a century ago.
Supported by a grant of £4,685 from Chippenham Area Board, a team of volunteers spent more than a week transporting several tons of soil and hardcore to the site near Double Bridge.
The 150-metres of affected towpath have now been levelled off and pipes have been installed to improve drainage.
The project has also allowed the water-level to be raised to improve access along the canal for the charity’s workboat.
The work was carried out by the charity’s Melksham, Chippenham & Calne branch.
Branch chairman Dave Maloney said: “The towpath is a very popular route for walkers and cyclists to enjoy the open countryside, and many people use it to travel between Chippenham and Lacock.
“However, there was a short distance where the period of dereliction had resulted in it sinking slightly due to poor drainage, so we wanted to raise it back to its original height in order to improve access for everyone.
“The main challenge was keeping the towpath open while we worked, but people were very understanding of any brief delays and we even managed to recruit a few more members!”
The Wilts & Berks Canal Trust is restoring the former waterway which once linked the Kennet & Avon Canal near Melksham to the Thames & Severn Canal near Cricklade and the River Thames near Abingdon, linking Chippenham, Calne and Swindon.
The stretch between Chippenham and Lacock already includes a significant length which has been excavated and refilled with water, and includes a restored bridge, spillweir and mooring points, as well as benches, birdboxes and information boards.
Longer-term, the aim is to extend the line to Melksham where a planning application has already been submitted to create a new junction with the K&A at Semington and then bring the canal along the River Avon through the town centre before reconnecting with the historic route south of Lacock.
Dave added: “The latest improvements are further evidence of the continuing progress of the restoration campaign and the support of the local community.
“Whenever we have a workparty, passers-by regularly praise us for our achievements and wish us well for the future.
“We would love to welcome more volunteers though.  There are lots of roles to choose from including fundraising and event management, but we’d particularly welcome people who are interested in the physical aspects such as digging, bricklaying and grasscutting.
“It’s a great way to enjoy the fresh air and make new friends.”
Visit www.melkshamwaterway.org.uk or www.wbct.org.uk
Picture: Canal Trust workparty organiser Ray Canter and fellow volunteer Keith Vickery beside the raised towpath