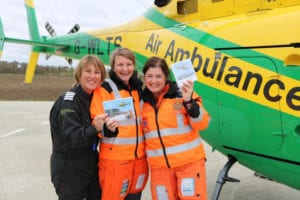 FESTIVE scenes of Wiltshire Air Ambulance’s airbase near Melksham and of Stonehenge feature on the charity’s Christmas cards this year.

It is the first time that the airbase, which the charity moved to in 2018, has been used as a design for the Christmas cards.

The card shows the charity’s Bell 429 helicopter flying over the airbase, in Semington, with snow on the ground, a decorated Christmas tree outside and the charity’s cheery mascot bears Wilber and Marsha.

The Stonehenge card also depicts the charity’s helicopter flying over the iconic monument, near Amesbury, in snow.

Claire Kelly, people and wellbeing manager at Wiltshire Air Ambulance, said: “We like to feature iconic landmarks in Wiltshire on our Christmas cards and we’re really pleased to include Stonehenge and our airbase at Semington this year.

“Since we moved to Semington we have received a lot of support from residents, schools and businesses in the Melksham area who feel proud that our lifesaving service is located in their area. We hope that both designs will be popular with our supporters wherever they live and work.

“The funds raised from our Christmas cards will help us to continue saving lives in Wiltshire and surrounding counties.”

The Christmas cards are in packs of ten and are priced at £4. They are available in Wiltshire Air Ambulance’s charity shops in Maristow Street, Westbury, BA13 3DN, and in Maryport Street, Devizes, SN10 1AH. They are also for sale at the airbase’s reception at Outmarsh, Semington, BA14 6JX (Monday to Friday between 8.30am and 4.30pm). Also on sale are 2020 diaries in a variety of colours, price £4.

There are numerous other shops selling the Christmas cards so to view the stockists visit the website – https://www.wiltshireairambulance.co.uk/christmas-cards-1/