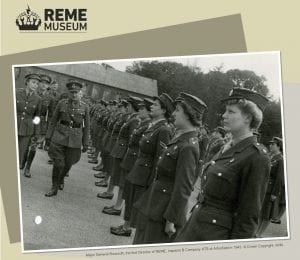 For 75 years, the Royal Electrical and Mechanical Engineers (REME) have kept the British Army’s equipment battle ready, keeping the punch in the Army’s fist. Throughout its history, women have worked alongside REME’s male fighting force, excelling in careers not always available to women in the civilian world.

A new exhibition at the REME Museum tells the stories of some of these exceptional women. Women such as Junior Commander Marjorie Inkster who served with the Auxiliary Territorial Service (ATS), an organisation created during World War Two for the thousands of women keen to help the war effort. She was attached to REME to maintain and repair radar equipment – vital work that helped defend Britain from aerial attack.

‘we were expected to carry equipment, work on the aerials, twenty feet up, spend an hour or two on the roof in rain and wind or do anything the men would do and were very happy to do that’

Joining the Army enabled women like Major Gwendolen ‘Bunty’ Sergant, later Howard, to qualify as Chartered Engineers – a difficult feat for women in the 1950s and 60s. Major Sergant served all over the world with REME, helped design the Chieftain tank and was made President of the Women’s Engineering Society as well as a Fellow of the Institution of Mechanical Engineers.

These are just some of the stories that visitors will be able to explore.

The role of women in the British Army has seen dramatic changes over the decades. The exhibition will look at the restriction’s women have had to overcome, from being unable to serve if married, to being paid less than the men they commanded. It will also highlight the opportunities and support which women have received, to help them excel in their chosen career and to proudly serve their country in the same role as their male colleagues.

With women making up 10% of the British Army, and with this number increasing, the exhibition will showcase some of the stories of women currently serving with REME, alongside their pioneering predecessors.

To uncover the fascinating story of the Women of REME, past and present, visit the REME Museum in Lyneham, near Chippenham. The exhibition opens 23 April and runs until 5 October 2019. The Museum is open Tuesday to Saturday 10.30am – 4.30pm and entry to the temporary exhibition is included with admission.

About the Corps of the Royal Electrical and Mechanical Engineers:

REME was formed in 1942 and has the responsibility for repairing and maintaining the British Army’s equipment.

By May 1945, REME had proved to be indispensable and had expanded in response to the scale, variety and deployment of the weapons and equipment in service.

From its creation, REME detachments have served on the front line of every major theatre of operation. Since World War II this has included Korea, Malaya, Northern Ireland, the Falklands, the First Gulf War, Angola, Zaire, Bosnia and Afghanistan.

The exhibition runs until 5th October at the Museum