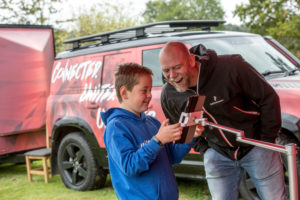 :  Local rugby club, Westbury RFC, has made considerable improvements to the club facilities, equipment, and training, thanks to support fr Vodafone.

:  The £9,000 raised from the event has allowed the club to make much needed renovations and upgrades to equipment.

:   New tech has allowed the club to provide coaching and analysis on the pitch as well as improving their financial efficiency.

:  Vodafone also launched the Rugby Hub to offer bespoke business resources for grassroots clubs including Westbury RFC, which has allowed them to        upskill volunteers in areas such as digital marketing and social media.

Westbury RFC is celebrating a massive boost following the success of Vodafone’s fundraising 2021 event, which raised over £9,000 for the club. The money has been used to improve club facilities and training equipment.

Vodafone was joined by former British & Irish Lion and Bath Rugby full-back, Jason Robinson, current England rugby player, Emily Scarratt and The Good, The Bad & The Rugby’s, James Haskell, Mike Tindall and Alex Payne. Over 550 people from the local community attended the fundraising event for a day of activities and pitch side fun, which helped fundraise and drum up support for the club.

Westbury RFC put a significant amount of the money towards much needed renovations of the clubhouse, which have transformed the clubhouse into a space for members of the local community to enjoy.

Alongside the funds raised, Vodafone donated a new video analysis camera to help Westbury RFC improve its coaching analysis and to be able to review women’s games for the first time. A new payment system for the bar, which is the club’s primary source of income, has helped them increase revenue and stock-taking abilities.

Westbury RFC also benefitted from Vodafone’s new Rugby Hub, a bespoke business resource for all community clubs across the UK and Ireland. With Westbury RFC naturally reliant on volunteers, the Rugby Hub resources will allow the club to upskill its volunteers in vital areas such as digital marketing, and content and social media, to help grow its profile and thus become more self-sufficient.

Recognised for its community spirit and solely volunteer-led operations, Westbury RFC was one of four clubs – Aberdare RFC, Bannockburn RFC and Dunngannon RFC – selected by Vodafone for the series of fundraising events.

Emma Samways, Westbury RFC Director, “It has been a fantastic year since we held the event at Westbury RFC. We have seen an uplift across the club, particularly the men’s teams, but the new resources and equipment have also allowed us to improve the clubhouse and the efficiency of the bar. Vodafone’s social media tool kits have also helped to boost our volunteers’ digital skill sets which will have a huge impact on the club.”

Vodafone’s Chief Commercial Officer, Max Taylor, “At Vodafone we are committed to supporting grassroots rugby in the UK. It is fantastic to see how successful the fundraising events have been and how each of the clubs have put the funds to such effective use.”

During the event, Westbury RFC volunteers also attended workshops designed to improve digital skills, which will allow the club to build a stronger online presence, drive awareness and grow its supporter base to help maintain long-term sustainability.

The day’s events were concluded by a live podcast recording of The Good, The Bad & The Rugby, guest starring Jason and Emily. Along with current rugby affairs, injuries and the day’s antics, the panel talked to the importance of grassroots rugby and how – with a little bit of digital and business support – clubs can take themselves to the next level.

Vodafone is committed to supporting rugby in the UK through current partnerships with the WRU and DMP Sharks.

This site uses Akismet to reduce spam. Learn how your comment data is processed.