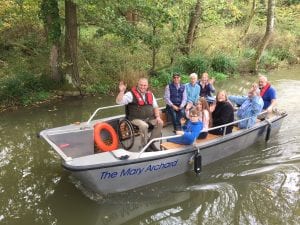 A NEW tripboat is demonstrating the potential of a restored waterway through the Wiltshire countryside.
The Wilts & Berks Canal Trust has made great progress in breathing new life into the once-derelict route between Chippenham and Lacock.
Earlier this year the charity completed the restoration of a continuous stretch from the former flight of locks near Pewsham to Double Bridge near Reybridge, a distance of almost 1.2 kilometres.
This allows a specially-adapted workboat to transport volunteers and their equipment back and forth along the route and to make improvements to the opposite side of the bank.
Now the Trust has used a legacy donation to purchase a tripboat as well, which will be used on restored sections of the canal and other waterways across the area.
The boat was officially named and launched at the restored Pewsham Wharf on Saturday afternoon, before taking invited guests on a slow and scenic trip along the waterway.
It was the first time in more than a century that people could view the canal from the same perspective as the original narrowboats.
More than five metres long and two metres wide, the ‘Mary Archard’ features a bow which can be lowered to provide wheelchair access.
The £14,000 cost was funded by a £9,400 legacy from local resident Mary Archard with the balance paid for with funds raised by the Melksham, Chippenham & Calne branch of the Wilts & Berks Canal Trust.
Branch chairman Dave Maloney said: “Mary was a member of the Trust and enjoyed walking along the canal at Pewsham and chatting to our volunteers, watching the progress of our work and sending a donation with every Christmas card.
“We were very sorry to learn of her passing away, but will be forever grateful for her generous legacy which will provide so much enjoyment to so many people.
“The tripboat has already been used at local river festivals and other events where it has been a big success, but our ultimate aim is to arrange regular days at Pewsham were it can take visitors along the original route the canal.
“This stretch is already hugely popular with people of all ages but they could only see the water from the towpath and wheelchair users sometimes found it difficult to travel to the other end.
“Soon everyone will have an opportunity to glide peacefully through the beautiful Wiltshire countryside, enjoying a glimpse of how the canal may have looked from the bow of a narrowboat more than a hundred years earlier.
“And, hopefully in the not too distant future, this same view will be enjoyed by narrowboats once again – but this time for tourism rather than trade.”
The Wilts & Berks Canal once carried goods from the Kennet & Avon Canal near Melksham to the Thames & Severn Canal near Cricklade and the River Thames near Abingdon, connecting Chippenham, Calne, Royal Wootton Bassett and Swindon. Cargoes included coal and corn.
It opened in 1810 but was formally abandoned in 1914 due to competition from the railways and soon fell into disrepair. The Pewsham stretch was overgrown and largely forgotten.
However, today the Wilts & Berks Canal Trust is steadily restoring several sections around the county. The stretch between Chippenham and Lacock includes a restored bridge, spillweir and mooring points, as well as benches, birdboxes and information boards.
Longer-term, the aim is to extend the line to Melksham where a planning application has already been submitted to create a new junction with the K&A at Semington and then bring the canal along the River Avon through the town centre before reconnecting with the historic route south of Lacock.
Visit www.wbct.org.uk