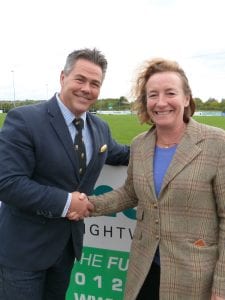 The sponsorship agreement, which will initially last the 2017-18 season, will support over 200 children aged 5-16 who play for the club’s “minis” and “juniors” teams.

At a lunch for the club sponsors Juliet Davenport, Founder and CEO of Good Energy, commented:

“I’m thrilled that Good Energy is helping to power the grassroots of Chippenham rugby club. It’s a natural partnership for us: the club has a great community ethos. We’re so proud to help the club welcome local boys and girls that want to play rugby, regardless of gender or ability. I can’t wait to get more involved in the club and watch the kids progressing on the pitch.”

Chippenham RFC has been responsible for the development of several high profile players, including ex-England player, Kim Oliver. Before women’s rugby was well-established in the UK, while a teenager Kim challenged the sport’s national governing body – with the full backing of her club – to let her play as part of the boy’s team. Kim’s actions ultimately resulted in the authorities agreeing to support girls’ rugby nationally. Kim went on to earn 43 caps for England women’s team, including a World Cup final.

“If it hadn’t been for my team mates at Chippenham and the club itself supporting me, I would probably have stopped playing like so many others girls. I will be forever grateful to Chippenham RFC for the backing they gave me as a 13 year old girl and I think it’s brilliant that a community-minded local company like Good Energy is stepping up to support the club.”

“We’re really proud of our vibrant, successful club and our work to encourage boys and girls into the sport and bring out the best in them – both on and off the pitch. But we simply couldn’t do what we do without our generous sponsors, so we’re over the moon to have a purpose-driven company like Good Energy on board.”