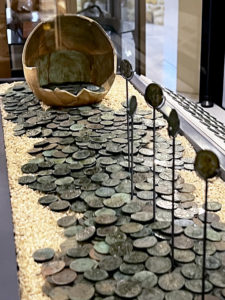 Over 1,200 Roman coins found ten years ago in a field near Malmesbury are being displayed to the public at the town’s Athelstan Museum.

The Malmesbury Coin Hoard has spent the last seven years being professionally conserved and a group of committed volunteers led by trained archaeologist and museum trustee Maria Marsh have been cataloguing them. The hoard will be unveiled to the public on Friday April 8 after specialists built an environment-controlled display cabinet to showcase the hoard.

Maria said: “It’s amazing to see the coins together with the pot, on display in the museum at last. The volunteers I’ve worked with have been amazing in their commitment to prepare the hoard for display, just a few miles away from where they were originally found.

“I believe this is one of the few times that something as big as this has been returned to a local museum so close to where it originally went into the ground.”

One of the volunteers who has worked on the hoard is the very man who found the hoard while metal detecting ten years ago.

Anthony Mims, known to all as Mimzy, got the bug for metal detecting in childhood however his career in the Army left little time for his hobby. When he left the Army at the age of 41 and became a truck driver, he had more time and it was a chance conversation with a farmer which led to his interest being piqued.

“He told me that four metal detecting guys from Swindon had been regularly visiting one of his fields in Milbourne over a four year period. I thought that was curious, you wouldn’t keep going back if you were not finding anything. He offered me the opportunity to do the same and I took it.

“I’d never before found a hammered coin however within three paces I found my first one – a medieval silver coin. In 2006 I found a number of Roman coins, then I found more over the next few years.

“It was in 2012, in a higher level of the field, that I came across the hoard and I didn’t really realise what I’d found. I moved the earth around it as best I could, took the whole hoard and put it on my waterproof coat and wrapped it all up. As soon as I could I took it to Chippenham Museum.”

The hoard was examined and declared as Treasure Trove which means it has  historical value, museums can express an interest in it, and the Treasury puts a value on it. The value, once the item is purchased, is then split between those who find the treasure and the landowner. In this case, Mimzy and the farmer, who has since passed away, did receive an amount of money.

“It was not as much as people think,” Mimzy said. “It was not a fortune however I don’t do it for that. I’m a genuine lover of history and the hoard, where it was found and the other items found on the site give us clues to the past which I find fascinating.”

No one knows why the coins were buried in the Wiltshire field (the exact location of which is a secret) though both Maria and Mimzy wonder if it was some kind of religious offering.

The hoard was purchased by the Athelstan Museum in 2015 in a bid led by Maria Marsh, then catalogued andadditional funds raised to display it safely. In total the project has cost in the region of £50,000 and members of the community contributed towards the overall cost. The museum trustees were also supported by grants from the National Lottery Heritage Fund and the V&A (Victoria & Albert) Purchase Grant.

Sharon Nolan, Chair of the Museum Council and Trustees, said: “This is the culmination of a great deal of hard work by a group of committed and interested volunteers resulting in a display shows the coin hoard to its best advantage. I’d like to thank all my colleagues who invested so much of their time to create this display, and to Maria for leading this most interesting project.”

Displaying the hoard was delayed due to the pandemic however the volunteers kept on with their painstaking work until the cabinet was installed in the museum two weeks ago. For more information about the museum opening times visit https://www.athelstanmuseum.org.uk