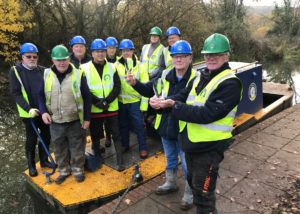 Delighted volunteers have won two prestigious awards for their impressive efforts to restore a former waterway.

The Melksham, Chippenham & Calne branch of the Wilts & Berks Canal Trust received both of the charity’s annual Tony Davy Awards.

The two crystal accolades, named after the charity’s former chairman, are presented to the branch which submitted the most volunteer hours over the previous 12 months, and the branch which saw the biggest increase in hours.

The Melksham, Chippenham & Calne team recorded 12,286 hours – more than double the previous year – with an estimated value of more than £168,000 when applying for ‘matched funding’.

He said: “It’s a tremendous honour to receive these awards on behalf of our amazing teams.

“We’ve always been a very active branch, but we saw a surge of interest during the pandemic when people were looking for new opportunities to enjoy fresh air and exercise.

“Our workparties were in the open air in the countryside, with plenty of room for social distancing, so by following the rules in place at the time we were able to continue the restoration throughout much of that difficult period.

“Those new volunteers have stayed with us and got more involved, and helped to recruit even more supporters.”

Most of the hours have been focused on the rewatered stretch between Pewsham Locks and Double Bridge where the charity is rebuilding a waiting wall, dry-dock and other structures, and at nearby Green Lane Farm where teams have been clearing another section of recently uncovered canal.

Volunteers also run popular tripboats at big occasions such as Chippenham Folk Festival, Chippenham River Festival and Melksham Food & River Festival, as well as on the Pewsham stretch during the summer, while others arrange fundraising events or give talks to local groups.

Work also continues on the refurbishment of the charity’s own canalside pub, The Peterborough Arms at Dauntsey Lock.

There are still plenty of opportunities for new volunteers, with a particular need for bricklayers, civil engineers, quantity surveyors and project managers – although all offers of help are appreciated.

Dave added: “We have workparty volunteers aged from their 20s to their 80s, including doctors, nurses, gardeners, taxi drivers, company directors and university lecturers.

“We’re sincerely grateful for every hour they can spare, and are always keen to welcome new supporters who want to bring the Wilts & Berks back to life.”

The charity’s ultimate ambition is to restore the entire waterway from the Kennet & Avon Canal near Melksham to the Thames & Severn Canal near Cricklade and the River Thames near Abingdon, connecting Chippenham, Calne, Royal Wootton Bassett and Swindon.

For further information on joining the Melksham, Chippenham & Calne branch of the Trust, and the current volunteering opportunities, email dave.maloney@wbct.org.uk or visit www.wbct.org.uk