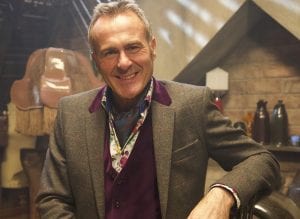 Curiosity is a competitive format which puts contestants’ knowledge of antiques and collectables to the test. In each episode two teams of two will move from room to room, using their skills, expertise and intuition to take on different tasks and challenges – all against the clock.

The initial idea was dreamed up by Paul and his wife Charlotte.

Paul, who lives in Wiltshire with Charlotte and their children Dylan and Meredith, said: “This show is the culmination of an idea Charlotte and I came up with at home at our kitchen table.”

“I always loved any kind of treasure hunt,” Charlotte Martin said. “Then working on various series myself in television, meeting Paul and being immersed in the world of antiques and collectables I began to think about how we could bring an element of a ‘searching’ together with our mutual love of vintage, quirky and social history into one programme. Gradually the idea of Curiosity took shape and it’s been amazing to see it become a reality.”

The pair teamed up with Pete Lawrence, the boss of Bristol-based independent company Hungry Gap Productions to develop the format and bring Curiosity to life.

The programme is set in a series of distinctive rooms including The Den of Antiquity and So Last Century and combines vintage and social history in an entertaining way.

Pete, founder of Hungry Gap Productions said: “It’s a fun show and it feels like anything can happen.”

“Our teams are tasked with finding fakes, spotting links between objects and discovering the fascinating stories behind the kind of trinkets and treasures that cram collectable emporiums and second-hand shops throughout the land,” Pete said.

“Paul is a fountain of knowledge and he brings the stories of the objects to life explaining their provenance and unique attributes.”

Paul’s ‘co-presenter’ in the series is a four-legged actor – a Bassett hound named after his own dog: Baxter.

“Baxter is my mate and my side kick at home. The programme is a bit quirky like him. He’s a proper character and this is his five minutes of fame – sort of. In real life the specially trained stage dog is actually called Maggie! That’s Curiosity for you!”

Curiosity comes to our screens on Monday April 1 at 2.15pm on BBC One and will run weekdays for three weeks.