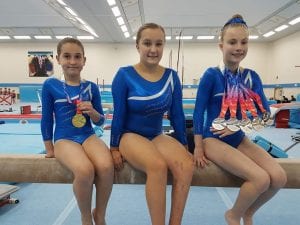 A talented pair of Wiltshire gymnasts have both won national medals in their debut at a recent championship.
Francesca Di Pisa, aged nine, and Teigan Higgs, aged 13, are members of Moonraker Gymnastics Club in Chippenham.
They recently competed in the womens junior sections of the Disability Artistic British Championships 2017, organised by British Gymnastics, at the Lilleshall National Sports Centre in Telford.
At their first-ever appearances at the competition, Francesca was awarded a gold medal and Teigan was awarded five silver medals.
In addition, their fellow club member Millie Strange, aged 16, came sixth after competing in the adult section for the first time.
Their achievements are all the more remarkable because Francesca was born with a right-hand impairment, Teigan has a heart condition which required open-heart surgery when she was a toddler, and Millie was born with her left foot facing the wrong way.
Francesca started gymnastics at the age of five years old.
She received a gold medal in her class of the all-around section which included routines on the bar, beam, vault and floor.
Francesca said: “This was my first national competition so I was really nervous, but my parents persuaded me to keep going. I was surprised but very happy to win and now I’m hoping to enter the competition again next year.”
Mum Laura said: “Her gold medal win hasn’t really sunk in yet, but we’re so very proud of what she’s accomplished.
“She’s very determined and works very hard, but she has so much fun at the same time.”
Teigan started gymnastics at the age of seven years old.
Aside from the heart problem she also had a growth condition which resulted in one leg being longer than the other and which required an operation last year.
She received silver medals in the all-around, bar, beam, floor and vault sections of her class.
Teigan said: “It was nerve-wracking to start with, especially after I fell off the apparatus during the warm-up, but I forgot about all of my worries when the competition began.
“I was very surprised when I realised that I’d won so many medals, but it makes all of the hard work worth it.”
Mum Annie said: “When she was a toddler when we thought we might lose her due to her heart condition, so we’re very proud that she’s come so far since.
“We’re absolutely amazed by her determination and perseverance.”
Millie only took up the sport four years ago after recovering from multiple operations.
She was born with her left foot facing the wrong way and one leg was six inches shorter than the other, and had to undergo more than 20 corrective surgeries.
Millie received a silver medal in the womens junior all-around section last year but faced greater competition when she moved into the adult section for the first time this year. However, she still achieved personal bests across the bar, beam, floor and vaults.
Moonraker Gymnastics Club meets at the The Olympiad Leisure Centre in Chippenham.
Head coach Steve West said: “We’re delighted that Francesca and Teigan both came away with medals from their very first appearance at this national championship, and so impressed by Millie who did incredibly well to come sixth after moving up into the adult category.
“We’re all immensely proud of their achievements.”
Call Chippenham Moonraker Gymnastics on 07827 459242 or visit
www.chippenhamgymnastics.co.uk
Picture: Moonraker Gymnastics Club members (from left) Francesca Di Pisa,
Millie Strange and Teigan Higgs