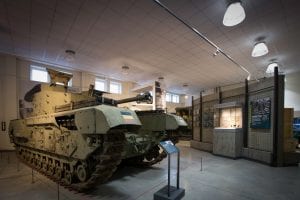 This half-term the award-winning REME Museum at Lyneham have come up with the perfect boredom busters to get your youngsters away from the dreaded screens.

A series of special activities, entitled Making Tracks, will entertain your 5-to-12-year-olds.

There is a children’s assault course – with real REME soldiers in attendance – and a “tank hunt”.

And talking of tanks, you can make your own tank with parachute. See if your engineering skills are up to scratch by dropping your tank “into battle” in one piece.

On the artistic side, you can design and colour-in tanks.

No advanced booking is necessary. Simply come along and buy a ticket for the Museum as usual. All kids’ activities are included in this Museum admission. Tickets can be purchased at the door, or in advance online via Eventbrite.

The REME Museum is housed at the former RAF Lyneham (now MOD Lyneham) and it celebrates the Royal Electrical and Mechanical Engineers and its crucial role in deploying and maintaining Britain’s military hardware since 1942.

The Corps’ Museum has won praise and national media coverage for its innovative exhibitions, displays and children’s events.

About the Corps of the Royal Electrical and Mechanical Engineers:

REME was formed in 1942 and has the responsibility for repairing and maintaining the British Army’s equipment.

By May 1945, REME had proved to be indispensable and had expanded in response to the scale, variety and deployment of the weapons and equipment in service.

From its creation, REME detachments have served on the front line of every major theatre of operation. Since World War II this has included Korea, Malaya, Northern Ireland, the Falklands, the First Gulf War, Angola, Zaire, Bosnia and Afghanistan.