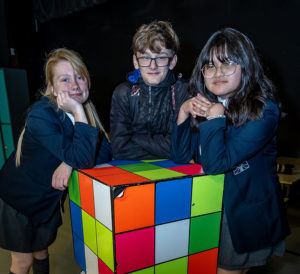 Students at Lawn Manor Academy in Swindon are inviting people to step back in time and join them in the 1980s!  On the 5th and 6th July 2022 students will be performing in what promises to be a fabulous night of musical entertainment, reminiscing about school life four decades ago.
‘Back to the 80s’ is a jukebox musical featuring pop songs from the era.  Around 50 students from years seven through to 11 at Lawn Manor Academy are involved with the show and they have been rehearsing hard since last term.
David Jones, Head of Expressive Arts at the school commented: “It promises to be a great night of entertainment with every facet of performing arts involved in the production, from music to dance, through to acting and set design.  It’s great to see the pupils performing again and thriving on the creative buzz.”
Showtime is at 6pm on the 5th and 6th July in West Manor Hall, Lawn Manor Academy.  Tickets are available for purchase from the school and cost just £4 a ticket.
For more information: Contact Mandy Hooper of Vox PR on 07967 193765 or mandy@voxonline.co.uk