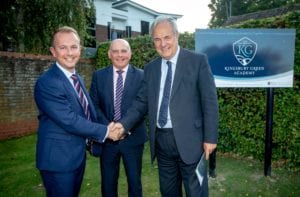 Parents, children, students and community leaders got a taste of the future for Calne education when they celebrated the launch of the town’s new Kingsbury Green Academy.

Several hundred people saw students showcase some of the excellent skills and talent within the school, including dancers and singers interpreting Mary Poppins’s Feed the Birds and the house band giving some rousing renditions of classic rock numbers.

Visitors also got the chance to see some teaching staff bringing their subjects to life, including members of the history department who recreated a gory field hospital scene from World War 1 and science teachers who created some spectacular demonstrations around the physics of colour and light.

Welcoming the guests, who included North Wiltshire MP James Gray, Calne Mayor Councillor Robert Merrick, Deputy Mayor Richard Jones, and Director of Education for Wiltshire County Council Helean Hughes, Principal Jason Tudor said that the school’s motto, Achieving Excellence Together, will be at the heart of everything students and staff do.

“We will leave nothing to chance, because your children are too important for that. This school will be so good that every single family in Calne will want to send their child here.”

Kingsbury Green Academy is part of the Royal Wootton Bassett Academy Trust. The decision to join the trust was led by Jason Tudor, who took over the role of Principal in 2015 and has led the school to record breaking results every year since.

Kingsbury Green Academy is holding an open evening on Thursday 12 September at 6pm. For more information go to www.kingsburygreenacademy.com