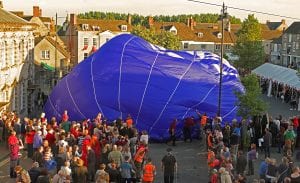 There is good news to report. The Friends of Athelstan Museum (FOAM) are expecting planning permission and listed building consent very shortly and then we will have to discuss a contract price with our builders. If we can agree here then we’re off!

We are still raising funds and the Walter Powell weekend was to further that. Walter Powell, I’m sure you don’t need reminding, was M.P. for Malmesbury 140 years ago. He was very popular, so much so that, when the election was called no one stood against him! (Happy days). He was a great benefactor for Malmesbury and the Somerfords; schools, reading rooms and generous dispensing of coal in the winter to the old and infirm plus lavish Sunday school treats for the children. He was a keen balloonist, indeed sadly he lost his life when he was blown out to sea and never seen again. There is a newly published book about him available from Athelstan Museum. However before this tragedy he took off from the Cross Hayes in Malmesbury in his balloon the Eclipse. And it was around this event the weekend revolved.

On Friday two good lectures were given to a packed house. James Gray spoke about his predecessor, carefully avoiding any political references, and the Sir David Hempleman-Adams spoke of his adventures. He was the first man to climb the highest mountain on every continent as well as going  to both the geographic and magnetic poles, both north and south. He then took up ballooning! He holds several world records for those feats. We learnt about some of these.

Saturday we held walks around Malmesbury showing where Powell had left his mark and also a massive painting exhibition in the Hub in the town hall. We held a competition with the help of MADFAS through the schools for paintings of his balloon. We had nearly 500 entries! Wonderful! Everyone was on display.

But Sunday was the big day. This was the day Sir David was to try to emulate Walter Powell’s feat. We’d done our research it could be done but there must be virtually complete stillness. You can imagine how we watched the weather forecasts and throughout the week they were a bit borderline – maybe OK- maybe not- should we postpone it? – but on Saturday they were good – go for it.

The Cross Hayes was closed to traffic and the carpark cleared; tents were erected; tables and chairs put up and all bedecked with bunting. A large and cheerful crowd assembled, we think over 2000, and an air of anticipation grew. Sir David and James Gray arrived, bell ringing, on a vintage fire engine. The balloon arrived and was unloaded. It was lovely day, sunny, warm, just right except for one small thing. The slight but gusty wind refused to die down. We waited but still it blew. The envelope was partially inflated and it was enormous. It filled the middle of the Cross Hayes, a great big blue pulsating mass. The pulsations were from the puffs of wind and everyone could see that any attempt to take off would have been foolish. Sadly but cheerfully the crowd dispersed. It had been great fun and it was wonderful to see Malmesbury together in a festive mood; it had been a fun day, well worth doing and we had raised some more money for the Moravian church project.