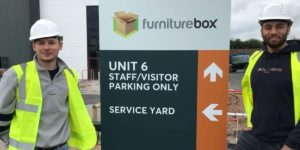 Online furniture retailer Furniturebox know a thing or two about helping other people create their dream home but doing it themselves has been a passion project culminating in a 15m tall building on an 88,000 square foot plot – that’s equivalent to 1200 double decker buses! The building is located on the M4 Chippenham junction, with a roof covered in solar panels, a bank of electric car charging points, 5 floors of stock storage and cutting-edge stock-picking technology, all 18 months in the making.

They’ve even managed to secure some top-notch local celebrity points for the grand opening as former Dragon and founder of online greetings card retailer Moonpig, Nick Jenkins, has agreed to do the honours of cutting the ribbon.

“We actually met Nick a few years ago through a young entrepreneur mentoring scheme. Nick was kind enough to give Monty and I some amazing advice and support as we embarked on this life-changing journey starting up Furniturebox from Monty’s basement, and we’re so happy Nick’s agreed to come back and help mark the occasion of us growing into a bigger and better home.”

The new warehouse and headquarters for the company (branded fastest-growing business in the South West by the Sunday Times 100 for 2022) will be located at St. Modwens Park, Chippenham. It’s been incredibly important to the founders of Furniture to stay in Wiltshire and give back to the local economy that helped them grow in the first please.

The new HQ will also be a step forward for the company’s sustainability goals, with plans to cover the whole roof in solar panels, 9 electric car charging points, staff sustainable travel initiatives including signing up to the Government’s cycle to work scheme, and reduced impact on the public from our courier vehicles due to the site’s close proximity to Junction 17 of the M4.

“A lot of thought’s been put into the wider site layout, with a lot of focus on reducing our carbon impacts and offsetting with green initiatives. There’s lots of green space, too, so our staff can take walks during their lunch, eat outside, and socialise with other companies on the site, which will all enhance the overall wellbeing for Furniturebox staff based there. It’s a big focus for us. And after so much hard work from everyone involved, it’s wonderful to see this building as a bit of a testament to everything we’ve achieved in a relatively short space of time, and have a chance to celebrate.”

“Our unit at St. Modwen Park has been purpose-built for us. We came up with the concept for our innovative 5-floor pick tower ourselves to massively increase efficiency. It also means all our deliveries and big vehicles won’t be impacting on smaller roads within Mere (where our current warehouse is based) anymore, which is great for the local resident

For a company that just 7 years ago was operating with two 17-year-olds out of a basement in Salisbury, things are looking bright. Dan Beckles and Monty George now employ a total of 48 staff across their Wiltshire and Bristol offices and current warehouse (which is scheduled to close one the Chippenham warehouse is open and fully operational).

In fact, after winning Wiltshire Business of the Year twice in a row, as well as making it onto the Sunday Times 100 and Brightpearl Lightning 50 as fastest growing South-West business, and its founders being invited to join the Forbes ‘30 Under 30’ 2022 cohort, it seems this ‘local business done good’ isn’t about to slow down any time soon.

When asked ‘What’s next for Furniturebox?’, James Ewens says:

“Another warehouse! This tipping point of moving in the Chippenham site will allow us to expand our product range by 5 times, which means we’ll have the opportunity to work with new suppliers, new ranges and new categories, with the aim to need a 2nd warehouse. It’s all very exciting!”

The new warehouse and offices will give the online retailer room to grow and expand their product line. They currently offer their products on their own website as well as on Amazon, eBay, Wayfair and The Range, with the flagship launching of products on Wayfair US in July this year. So, this move to a bigger and more adaptable warehouse means Furniturebox will be able to keep more lines in stock and available for customers, and offer a later cut off from 1pm to 8pm for next day delivery.

And we’re excited to see what’s next for this seemingly unstoppable local business!