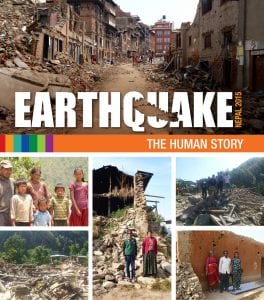 When Dee Freeston of Royal Wottoon Bassett answered the call for volunteers to go and help in a small hill village in Nepal, little did she think her efforts would be immortalised in a book commemorating the Earthquake in 2015.

‘It’s hard to believe all that has happened since I sat down and read the article in the Town Crier back last summer,’ says Dee.  ‘Living in the remote village with the three other volunteers, and working on the school, is something that I will never forget.’

Organisor’s of the project – the BOOK PROJECT – (you may remember the review of their – a day in the life of 100 women in Britain – book) set up the programme as part of their response to the earthquake appeal.

‘People kept sending us money saying ‘do something now,’ says Dr Rosa Matheson, Founder and Trustee of the BOOK PROJECT. ‘The village project was part of that. Dee’s team did so well with the work and the villagers we called them ‘the A Team’.

Dee gets an individual mention

Dee Freeston came through the appeal in a magazine. A one-time hippie traveller she wanted to return to Nepal and give something back for the wonderful time it had given her years before. “If I make just one life better it will have been worth it”, she said.  Dee was up for everything and anything that would ‘make life better’

It is a very special book, remarkable in many ways.
Individually written pieces by 50 plus people and organisations – locals and foreigners –
from a waiter, volunteers, doctors, students, children, a mother having a baby, teachers,
a dancer, trek guides, relatives abroad, Rotarian and reporters.
on the mountains, in the towns and in the villages –
with incredibly moving photographs.
It is a truly humbling and awesome book being a testament to people’s humanity, resilience, pride, courage and tremendous kindness.
One cannot read it and not be moved, sometimes to sadness, sometimes to joy and often to wonder at the majesty of human nature.