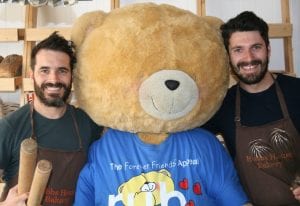 The Forever Friends Appeal, the primary charity at Bath’s Royal United Hospital, are excited to announce that the popular Baking Brothers Tom and Henry Herbert from Hobbs House Bakery, have become the proud new ambassadors for their annual fundraising week: “Ted’s Big Bake Off”.

Ted’s Big Bake Off which is proudly sponsored by BuroHappold Engineering, sees adults and children all across Bath, Somerset and Wiltshire pop on their aprons and get baking for the RUH. From Victoria Sponge’s, fairy cakes, breads, pastries and pies there’s something for everyone to enjoy…and it’s a delicious way to show your support for the hundreds of thousands of local people who are cared for by the Hospital each and every year – the real icing on the cake! Now in its second dough-raising year, the official fundraising week will take place between Monday 17th and Friday 21st October 2016.

Tom and Henry are now asking all individuals and organisations across Bath, Somerset and Wiltshire to register today and pre-heat their ovens, prepare their mixing bowls and get ready to bake a difference for patients and their families this October. Whether it’s holding a coffee morning, bake sale or hosting a bake off competition at work, school or with friends and family, you can choose your own recipe for success to help patients and their families at the hospital. Funds raised by your cake activities can be dedicated to support the RUH Cancer Care Campaign, which is raising a minimum of £8.5 million towards the build of a pioneering new Cancer Centre at the hospital, or a ward or department of your choice.
Baking brothers Tom and Henry, who have enjoyed 3 seasons of “The Fabulous Baker Brothers” on Channel 4, global success with DiscoveryNetwork, and now have two books to their name, are fifth generation bakers who are also famed for fronting Hobbs House Bakery, their popular family run business and cooking school in Chipping Sodbury. The Hobbs House brand has now become so popular that a new Bakery has just opened in Malmesbury, and the boys couldn’t be happier to support the RUH, who serve many patients from this area.
Tom Herbert, Innovations Director at Hobbs House Bakery says: “Join us, Big Ted and local baking lovers for a delicious and fun week of fundraising. It’s a tremendously tasty way to raise money for the Bath Royal Hospital. So bake your best and we’ll see you there!”

Events & Community Officer for the Appeal, Emily Lynch, says: “Tom and Henry were kind enough to support Ted’s Big Bake Off last year and we are absolutely thrilled that they have agreed to come on board as official ambassadors for the event! When we decided to launch our very first baking themed event, the brothers were our first choice for support as the Hobbs House brand has become a household name in Bath – the quality of their baking is second to none! Last year, Ted’s Big Bake Off raised over £20,000 which will do so much to help transform patient care at the RUH. With Tom and Henry’s help, this year we hope that we can smash this fundraising target and raise even more funds both for the RUH Cancer Care Campaign and other areas of the hospital.”

Tom and Henry will also be paying a special visit to staff, visitors and patients at the Royal United Hospital on Friday 21st October to officially open the Appeal’s closing activity for the fundraising week: the “RUH Big Bake Sale”.

What you can do to help this appeal

Whether you’re an individual, business, school or community organisation, getting involved in Ted’s Big Bake Off 2016 couldn’t be easier! Simply visit www.tedsbigbakeoff.com to register and get your oven mitts on your FREE baking pack with tips, tools and tasty ideas to really add the icing on the cake. You could even win a visit from Big Ted himself! Plus if our baking week doesn’t work for you, you’re more than welcome to hold your event on a date that does.