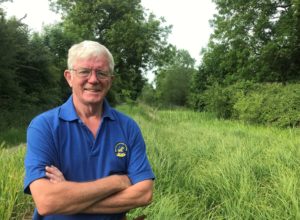 A popular stretch of restored canal between Chippenham and Lacock could be extended thanks to a new deal.

The Wilts & Berks Canal Trust has already rebuilt more than a kilometre of the former waterway from Pewsham Locks to Double Bridge.

Now the charity has signed a lease with Wiltshire Council for an additional 500 metre stretch from Double Bridge towards Reybridge.

Dave Maloney is the chairman of the Melksham, Chippenham & Calne branch of the Wilts & Berks Canal Trust.

He said: “We’re very grateful for the support from Wiltshire Council, which presents an exciting opportunity to improve and extend one of the most popular stretches to have been restored so far.

“Walkers, runners and cyclists enjoy this beautiful corridor through the local countryside, and we run tripboats through the summer for local families and community groups.

“However, the rewatered section currently ends at Double Bridge and the towpath becomes more uneven after this point.

“This new lease, which will be automatically renewed every seven years at a peppercorn rent, gives us the confidence to start investing in plans to restore and rewater this length too.”

Cllr Nabil Najjar, chairman of the Wiltshire Swindon & Oxfordshire Canal Partnership said: “Wiltshire Council is keen to support the work of the volunteers of the Wilts & Berks Canal Trust.

“The land was purchased by the former North Wiltshire District Council specifically to help the restoration project, and the fully restored canal will be an excellent leisure facility and wildlife habitat.”

Expert advice and surveys will be commissioned to improve the habitat and protect the wildlife, beginning in the Spring.

Assuming no problems are discovered, the channel will be cleared and the towpath raised.

The charity would then remove the bund at Double Bridge and allow water to flow into the new section.

The Pewsham section includes a flight of three locks which are steadily being repaired, as well as a wharf. There are also plans to rebuild a dry dock and carpenter’s workshop.

The charity aims to extend the Pewsham stretch towards Lacock and then connect with the original line south of the village, where the Trust has already purchased some of the land.

This would join the proposed new ‘Melksham Link’ to provide access to the Kennet & Avon Canal via the River Avon through the town centre.

The charity’s ultimate ambition is to restore the entire waterway to the Thames & Severn Canal near Cricklade and the River Thames near Abingdon, connecting Chippenham, Calne, Royal Wootton Bassett and Swindon.

For further information on joining the Melksham, Chippenham & Calne branch of the Trust, email dave.maloney@wbct.org.uk or visit www.wbct.org.uk

Photo: Dave Maloney beside the newly-acquired stretch of canal between Double Bridge and Reybridge. Photo by Justin Guy.