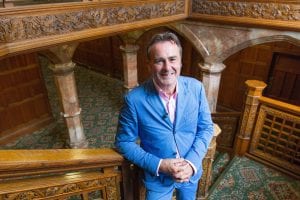 Flog It, the popular BBC One antiques programme presented by Wiltshire based Paul Martin will be holding a free valuation day at Grittleton House near Chippenham on Tuesday 26th September. The Bristol based BBC production recently transmitted its 1000th episode and the 17thseries is currently being recorded. The show regularly achieves an audience of more than two million viewers in its weekday afternoon slot.
Members of the public are invited to come along to Grittleton House, a grade 2* listed Victorian Manor House that was formerly a school and is now an events veune, with up to three antiques or collectables they might be interested in selling. Once valued, the owner and a team of experts decide whether an object is filmed and if it gets sent to Wessex Auction Rooms, Chippenham for inclusion in their sale on Saturday 14th October.
Everyone who goes along to the valuation day will receive a free appraisal of their items – even if their antiques are not chosen for filming or to go forward for auction.
Flog It has made many significant finds over its’ seventeen series including, in North Lincolnshire, a rare Aboriginal Broad Shield that had been kept hidden away in a viewer’s wardrobe before being brought along to a valuation day — it went on to sell at auction for £30,000! Flog It experts also discovered an unusual Royal Doulton Spook figurine in Blackpool which had been bought at a car boot sale for £2; it went on to sell at auction for £5,000.
Presenter Paul Martin, who lives near Melksham, said “It’s great to be filming Flog It in my home county of Wiltshire; I’m so pleased to be getting an opportunity to share this beautiful part of the world with our viewers. We always receive a warm welcome whenever we come to the county and I’m hoping plenty of people will take the chance to bring along their items to show us”
Vanessa Shipp, from Grittleton House said “We are so excited, we have hosted many antique fayres over the years but this is a first for us.  We cannot wait to welcome Flog It to Grittleton House.  The House is often referred to as a hidden gem in Wiltshire, so let’s hope there will be some more hidden gems on the day!”
The BBC will be making four editions of the show featuring Grittleton House and they will be transmitted within eighteen months of recording. Paul Martin will be joined at the valuation day by on screen experts Mark Stacey, Caroline Hawley and Michael Baggott.
BBC Flog It will be at Grittleton House, Grittleton, near Chippenham, Wiltshire, SN14 6AP between 9.30am and 4.00pm on Tuesday 26thSeptember. The items selected for filming at the valuation day will go under the hammer at Wessex Auction Rooms on Saturday 14thOctober.