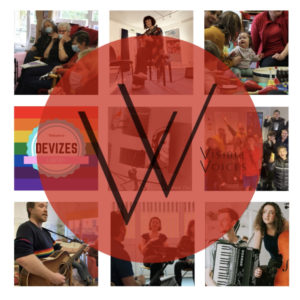 Trowbridge based charity Wiltshire Rural Music has spent 2022 in our county writing music with some unlikely collaborators. Visible Voices, a community songwriting project run by WRM, saw local songwriters ushered into a creative session with a vulnerable group and emerge with a song two hours later! After a call for participants in the early part of this year, the project quickly gained traction with community groups such as Alzheimers Support and Devizes LGBTQ+ keen to get involved. As a charity that thrives on providing a musical feel-good factor to those who need it most, a recording project seemed the perfect opportunity to celebrate togetherness once again, after 2 years of isolation and soul destroying zoom calls.

We began working with a diverse range of community groups, starting with Alzheimer’s Support and their Mill Street Club in Trowbridge and Doorway, a charity drop-in centre in Chippenham for those who are homeless, sofa surfing or vulnerably housed in a tenancy. Local songwriter Tamsin Quin entered Mill Street Club with her guitar and spent 2 hours in the company of what she called ‘cheeky’ pensioners who wanted their song to go in a completely different direction to what she’d expected! In the early part of 2022 we also started songwriting with Devizes/Trowbridge based art group Arts Together. As word got out, more and more communities were approached we soon had 9 community hubs booked in ready for their songwriting session.

Each participating group were allocated a local musician who worked closely with members, taking time to understand their needs, dreams, and aspirations. From this creative process, ideas evolved as well as themes for lyrics and music. Youth group Trowbridge Future spent a raucous 2 hours with London songwriter and rapper, Gecko, who got the kids chanting along about their love of baked goods and computer games whilst literally singing the praises of the volunteers who look after them at their weekly sessions. The song they wrote is as upbeat as it is heartwarming. Giving group members autonomy over the creative process a sense of ownership over the finished piece proved invaluable to morale and self esteem throughout every workshop.

On hearing their finished song, Karolyne from Arts Together, a senior arts group said “this is truly gorgeous – far exceeded my expectations, and the group members really enjoyed themselves”. As press officer for WRM, but also a songwriter, I ran this workshop myself and was overwhelmed by the response from the particpants. Having had one session where we bounced ideas, I returned a month later with the finished song and nervously sang it to them live with the backing track, only to be met with tears of joy. The group couldn’t believe they owned something THEY had created – there’s a songwriter in everyone, you just have to dig deep to find it. The microphone came out one more time and everyone sang along to the chorus, which was then cut into the final track. A true collaborative experience. And the subsequent workshops were no different. From Erlestoke Prison to Stepping Stones Nursery, you won’t get a more varied collection of songs that truly represents the people of our fine county!