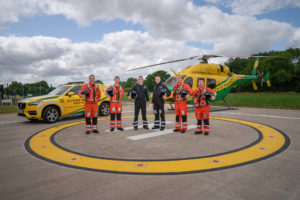 It was also the most number of missions carried out in a year since the charity became a stand-alone air ambulance in 2015.

During 2019 the charity hired a back up helicopter, an MD 902, before securing its own Air Operator Certificate (AOC) enabling its Bell 429 helicopter to resume flying in November on HEMS (Helicopter Emergency Medical Service) missions.

David Philpott, chief executive of Wiltshire Air Ambulance, said: “Despite the well documented issues with our Bell 429 helicopter during 2019, our aircrew were busier than they have ever been.

“When our helicopter is unable to fly our critical care paramedics and doctors use Rapid Response Vehicles. The vehicles have the same medical equipment that is onboard the helicopter so we are still able to provide gold standard medical care to patients.

”We rely on donations to provide our essential service so we’d like to thank our supporters for their generosity and our volunteers for their dedication in attending fundraising events and raising awareness of our charity.”

The team were also called to 112 falls, 104 medical collapses, 78 assaults and 66 sporting injuries, of which 27 were horse riding accidents. More than one in ten incidents – 132 – involved children.

More than one in three missions – 479 – took place at night.

The largest number of incidents that Wiltshire Air Ambulance responded to were in the Swindon area – 224.

For more information about the charity visit www.wiltshireairambulance.co.uk.