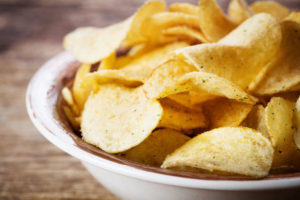 Who doesn’t love a bag of crisps? They are so moreish you can never eat just one. They were reportedly invented by a chef named George Crum who created them in 1853 at Moon’s Lake House near Saratoga Springs, New York. Legend has it that a customer kept sending his fried potatoes back to the kitchen, complaining that they were soggy, and not crunchy enough. Fed up with the constant griping Crum sliced the potatoes as thin as possible, fried them in hot fat, then doused them with salt. The customer loved them and “Saratoga Chips” were born! They quickly became a popular item at the lodge and throughout the whole of New England.

The crisps (or chips as they are called in the US) began to be mass-produced for home consumption. Originally, they were sold in barrels or tins, and quickly went stale. In the 1920s, Laura Scudder invented the airtight bag by ironing together two pieces of waxed paper, thus keeping the crisps fresh longer. Today, they are packaged in plastic or foil bags and come in a variety of flavours though ready salted and salt and vinegar remain the most popular.