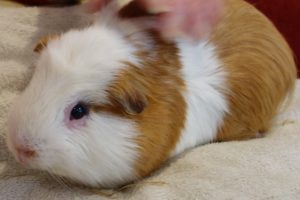 It was a normal active morning at Alzheimer’s Support day club in Trowbridge when Big Boy the guinea pig turned up, courtesy of support worker Fiona Sadd.

The atmosphere at the Mill Street club then noticeably changed – everything went quiet as club members petted and gently talked to their little guest. Big Boy sparked lots of smiles and instant reminiscences about past pets and proved such a hit that he came back for more snuggles after lunch.

Grant Newton, Head of Daycare Services said: “Our Mill Street club recently received letters from pupils at Holbrook School where they wrote about Bary and Gary, the school guinea pigs. Our members were so interested in hearing about them that Fiona decided to bring her own pet in for them to meet. In fact, Big Boy proved such a success that Fiona is now planning a repeat appearance for him.”

“Therapy dogs play an important role in our day clubs, they calm, entertain and bring a lot of joy to our members. We’re delighted to include Big Boy the guinea pig as an occasional member of our therapy animal fold.”