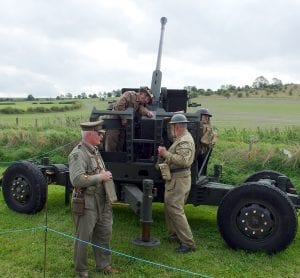 14 May 2015 marked the 75th anniversary of the formation of the Home Guard. The threat of invasion was very real on 14 May 1940, when men aged 17 to 65 not in military service were asked to enrol as Local Defence Volunteers to protect their country. They were renamed Home Guard in July 1940. The Wiltshire Home Guard (WHG) comprised 13 general service battalions, an anti-aircraft battery and a motorised transport company. At least 23,500 men volunteered in the WHG. The Home Guard was disbanded on 31 December 1945 after being stood down on 3 December 1944.

The WHG re-enactment group aim to portray the activities of the Home Guard and life on the Home Front. Set up to enable all family members to join, we currently have 28 members from across Wiltshire, Gloucestershire, Somerset and Dorset, and are always on the lookout for new members.

The WHG was set up to defend towns, villages and strategic locations. They undertook a variety of training including drill, weapons familiarisation and use, unarmed combat, methods for disrupting the enemy, and in some areas of Wiltshire bomb disposal. At events, we have drill sessions with the public being encouraged to take part, a village defence briefing where the methods of defence are explained including disrupting the enemy with caltrops, fake anti-tank mines and petrol bombs, and how to make use of captured weapons and ammunition. We also guard a UXB and demonstrate how it was made safe, and have a range of weapons and militaria on display. Where possible, a patrol will search out German infiltrators. Most activities are practiced at meetings held out of season. We even have a shooting competition, just like the Home Guard!

Home Front consists of several static displays including 1940s home complete with period pram, police station, ARP station, WVS collection point, and a period toy store. Land girls and a war correspondent are also attached to the unit. The public are encouraged to get close to the exhibits and ask lots of questions.

Fundraising for military charities is achieved with collection tins and by selling pictorial items.

If we’ve whetted your appetite, visit our website www.wiltshirehomeguard.co.uk where you will find a lot more information, including details of our own show at Bratton in September.

Are you a veteran Wiltshire Home Guardsman? We’d love to hear your stories. Please contact us at committee@wiltshirehomeguard.co.uk