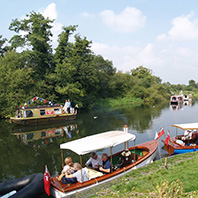 A local charity has recently been making waves on the local waterways.

The Wilts & Berks Canal Trust is a restoration organisation with a local section – the Melksham, Chippenham & Calne Branch – and it has a very ambitious aim: to restore the 60 mile long Wilts & Berks Canal so that it can be used for navigation once again. The canal originally connected local market towns including Melksham, Chippenham, Calne, and Royal Wootten Bassett, to the Somerset coalfields and also to Bristol, Bath and London.

2014 has been a momentous year for the Wilts & Berks Trust. Not content with the ongoing task of restoring bridges, locks or sluices, members also decided to undertake the unfamiliar challenges of Event Organisation. The idea was to commemorate 100 years since the Act of Parliament which formally closed the canal, and to this end, the Trust organised Heritage Open Days at Pewsham Locks near Chippenham, and a River Festival in Melksham. Both events were a huge success, with many local people learning more about this wonderful project.

Before railways or tarmac roads, canals were the motorways of their time; nowadays, people in search of escape from the stresses of modern life, appreciate life on the towpath: the slow peaceful pace, the chance to venture deep into the countryside, and the opportunity to get close to the wildlife that flourishes along these green corridors.

The Wilts & Berks Canal Trust has many local volunteers who undertake a multitude of tasks from driving diggers, bricklaying and clearing towpaths, to giving talks, raising funds, organising workshops for schools and dressing up as canal-folk; there are as many different jobs as there are volunteers! All give their time freely to this excellent project, which could so enhance the local environment.

New members and volunteers are always welcome; see more information on the