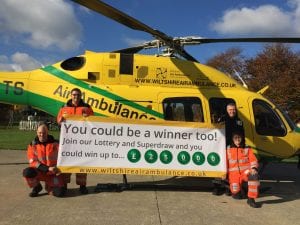 WILTSHIRE Air Ambulance’s Lottery and Superdraw have achieved a major milestone – by generating £1 million in income.

In addition, the number of people playing the charity’s award-winning lotteries – just over 35,500 – is an all-time high.

As well as raising money to keep the charity’s helicopter flying and saving lives, members who play the Superdraw can win up to £25,000.

One of the latest winners of the Superdraw, Sharon Pottinger-Jones, of Highworth, near Swindon, scooped £22,439, less than four months after she joined. She has made a donation from her winnings to Wiltshire Air Ambulance (WAA).

Mrs Pottinger-Jones said: “Wiltshire Air Ambulance is such a good cause. It serves the county and one day anyone of us might need it. I couldn’t believe I had won the Superdraw prize, I would encourage people to take part.”

Earlier this year the charity won the Lottery Operator of the Year at The Lotteries Council Awards 2016.

Rebecca de la Bedoyere, Senior Fundraising Manager at WAA, said: “We’d like to thank Sharon for making a donation from her Superdraw winnings to Wiltshire Air Ambulance. Our lotteries are our biggest, single source of income and it’s incredible to think that, simply by signing up and paying from £1 a week, our lottery members are raising enough to cover almost a third of our running costs.

“Wiltshire is a big county with a small population, so to have reached a combined membership of over 35,000 across the Lottery and Superdraw is a fantastic achievement. We’d like to say a huge thank you to all our lottery members for their support and also to the lottery canvassers who work hard to spread the word about our award-winning lotteries.

“We’d love even more people to sign up, as it really gives us a secure, reliable income that enables us to keep flying and saving lives – and of course everyone who joins is in with a chance of winning!”

Each chance in WAA’s regular lottery costs £1 a week and it has a top prize of £1,000 a week. Each chance in the Superdraw costs an additional £1 a week.  Players of WAA’s lotteries must be 16 years of age or over. For more information about the lotteries go to www.wiltshireairambulance.co.uk