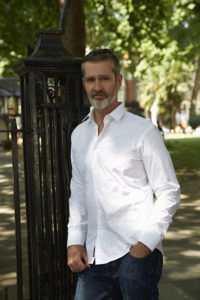 How would you like to spend an evening in conversation with Rupert Everett? The English actor, director and author will make a rare appearance at Messums Wiltshire this April 23 for a charity event that offers guests a chance to share in his rich career and creative life experience.

In lively conversation, Rupert will be sure to engage his trademark candour in what promises to be an entertaining and enlightening evening.

Guests will be greeted with welcome drinks at the restored 13th century tithe barn near Tisbury. A reception with light bites and the chance to view the contemporary Canadian Ceramics ‘No Boundaries’ exhibition will follow the main event.

The charity evening is kindly being sponsored by The Compleat Food Group, with all proceeds going to Rupert’s chosen charity, the Julia’s House Children’s Hospice. The three-time BAFTA award nominee has been a Patron for Julia’s House since the charity launched an appeal to open Wiltshire’s only purpose-built children’s hospice in Devizes in 2017.

Speaking about the charity, which provides a lifeline for the most seriously ill children and their families in Wiltshire and Dorset, Rupert said, “Julia’s House is incredibly important, particularly to families who are trying to survive as a family. Even if life is short it can still be full of enormous quality and meaning. I think that’s what Julia’s House can bring to a family.”

Rupert has starred in a number of high profile Hollywood films, including the 1984 drama Another Country, alongside Julia Roberts in My Best Friend’s Wedding, and in the dual role of Camilla and Carnaby Fritton in the 2007 St. Trinian’s remake. More recently the 62-year-old wrote, directed and starred in the Oscar Wilde biopic, The Happy Prince.

This year, the actor is bringing a new screenplay to life with the upcoming film, Lost and Found in Paris. Based on Rupert’s true-life experiences in 1970s Paris, the 2022 film will star John Malkovich, Kristen Scott Thomas, Kit Clarke, and Rupert himself in a supporting role.

An evening with Rupert Everett is being hosted at Messums Wiltshire on Saturday 23 April, from 6.30pm to 9pm. Tickets cost £50pp, to include drinks and canapes and a private view of the contemporary Canadian Ceramics ‘No Boundaries’ exhibition. Book tickets at www.messumswiltshire.com