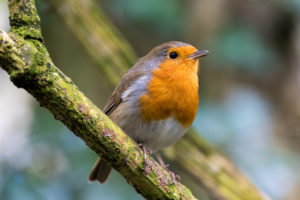 How the robin came to symbolise Christmas

Think of winter in the garden and you’ll most likely think of a robin. Think of Christmas cards and you’ll probably think of the same.

Why do robins have such a strong association with winter?

There is actually an increase in robin numbers during the winter months. They migrate from Scandinavia, Russia and Europe swelling the ranks of our resident robins when the days become too cold and food becomes scarce in their own countries.

There are several legends relating robins to winter and Christmas in particular.

The first legend hails from Victorian times, when the tradition of sending Christmas cards started. Royal Mail postmen of the time wore bright red uniforms, which earned them the nickname of ‘robin’ or ‘redbreast’. Victorian artists usually illustrated Christmas cards with pictures relating to the delivery of letters, such as post-boxes and postmen. Eventually artists began to play on this word association and postman ‘robin’ was exchanged for the familiar little brown and red bird, who began to appear in illustrations, sometimes delivering the letters. Middle class Victorians loved all things sentimental and charming, so the trend caught on and continues to this day, with the robin adorning everything from wrapping paper to Christmas jumpers.

Even before the Victorian era, robins had a strong association with the traditional Christmas story and Christianity. In one tale, it is said that when Mary was giving birth to baby Jesus in the stable, she noticed the fire Joseph had lit was in danger of going out. Suddenly, a small brown bird appeared and started flapping its wings in front of the fire, fanning the embers, and causing it to roar back to life. As the bird flew around tending to the fire, a stray ember made its way towards the tiny creature, scorching its breast bright red. Mary declared that the red breast was a sign of the bird’s kind heart, which would be passed on to its descendants to wear proudly ever after.

There are also Celtic-based tales which link the robin with wintertime. One tells of the feud between the wren, known as the Holly King of Winter, and the robin who was known as the Oak King of Summer. The Holly King was driven away by the Oak King on the Winter Solstice, and the robin took his rightful place. However, on the Summer Solstice, the Holly King gets to take his revenge, and the wren replaces the robin. This story repeats every year and represents the changing of the seasons. It was probably told by way of explaining why we see more robins during the winter months.

Whatever the truth, the robin is a beautiful cheery symbol of this time of year, and if you can spare a little food, particularly meal worms, and some water, he will reward you by visiting your garden daily.