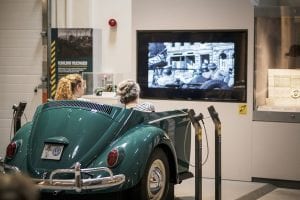 Of the many stories of WW2, the role played by the British army – and REME in particular – in kick-starting one of Germany’s post war car industries, is one of the most surprising.

On 28 May 1937 a new state-owned automobile company was formed in Wolfsburg to produce affordable cars for the masses. The Company became known as Volkswagenwerk, or “The People’s Car Company.” The car designed by Austrian automotive engineer Ferdinand Porsche was the KdF (Kraft-durch-Freude)-Wagen meaning “Strength-Through-Joy” or known more popularly now as the VW Beetle.

However by June 1945 a British Army Royal Electrical and Mechanical Engineers (REME) Workshop was operating out of the bombed out factory repairing military vehicles.

In August 1945 a REME Officer, Major Ivan Hirst arrived at the factory along with another REME Officer, Colonel M.A McEvoy. They soon came up with a plan aware there was a need for vehicles to be used by the occupying forces, and after discovering a VW beetle that could be made serviceable they sprayed it green. They took the Beetle to the Headquarters in Bad Oeynhasen and an order was placed for 20,000 cars, securing the immediate future of the factory.

The early days were not easy. Maj Hirst who was appointed as the Senior Residence Officer of the factory, needed to clear hazards from the site, rebuild lines, source raw materials – and trickiest of all – find a workforce amid the post-war chaos, with many German men still being detained as POWs.

Nonetheless, with help from the Allied administration – and REME –the 10,000th car had rolled off its production lines in October 1946.

Under Major Ivan Hirst’s stewardship strict quality control measures were introduced as well as an extensive service and dealership network was created.

On October 8th, 1949 the Volkswagen factory at Wolfsburg was handed over to German responsibility. Colonel Charles Radclyffe signed the protocol for the British

To mark this amazing Anglo-German story, REME Museum at MOD Lyneham is mounting a temporary exhibition on the 70th anniversary of Volkswagen’s relaunch as a civilian controlled company.

The exhibition telling more of this fascinating story runs from October 8th to 13th and Dr Ulrike Gutzmann from the Volkswagen Heritage Department in Wolfsburg will be providing a talk on Volkswagen 1945 – 1949 on the evenings of the 8th, 9th and 10th.

The REME Museum is located at MoD Lyneham the former RAF Lyneham site near Chippenham in Wiltshire. It sits just outside the camp with full public access and its own large car park. It’s open Tuesday-Saturday 10am to 4.30pm, with last admission at 3.30pm.