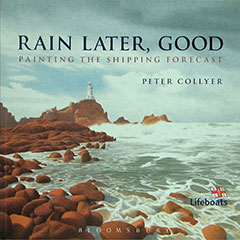 Dogger, Fisher, German Bight… What a strange effect those few words seem to have on people. You don’t have to be a sailor, or have anything to do with the sea at all, to know that they are part of that national institution the Shipping Forecast. Broadcast four times a day by the BBC on Radio 4 Long Wave, it’s precisely because they do it that way, even though it is targeted at those who need to have an up-to-date weather forecast for their time at sea, that the rest of us get to hear it, casting its mysterious and magical spell over the whole nation.

For many of us it is a kind of service, an arcane meteorological mantra, reminding us that we are an island community. For sailors and landlubbers alike, whether travelling on the ocean waves or the airwaves, it is about security. Dogger, Fisher, German Bight might be someone’s route for the next day or so, but for millions of us tucked-up safely at home in Radioland Castle it speaks volumes about what it is to be British, the drawbridge is up and here’s the weather for the moat; Dover, Fair Isle, Albion, Avalon…

I was drawn to Calne in the late 1970s, enticed here by the austere beauty of the Marlborough Downs and the opportunity to get involved in the Music & Arts Festival. I then discovered watercolour, for me the perfect medium for expressing my thoughts and feelings about my new environment, and I began painting on the Downs.

Eventually I decided to follow the chalk to where it met the sea. There I was captivated again and began painting on the Dorset coast. One day I found myself sitting in my car at Portland Bill, listening to the Shipping Forecast on the radio. As it moved along the coast towards me, Humber, Thames, Dover, Wight… it arrived at Portland, where suddenly there I was for the very first time in my life listening to it at one of the locations.

But it was back in my studio in Calne that I had the light bulb moment; we are all familiar with the names, but what do these far-flung places actually look like? What’s it like to stand at Malin Head, and where is North Utsire? I decided to make it my mission to go there and find out for us all.

So off I went, to Shannon, Sole, Hebrides, Viking, Fisher… It took me to Iceland twice and I still haven’t been there for 24 hours yet!

On my travels I met some fascinating people, ate the best fish & chips ever (as well as braised puffin!) but on the downside, sometimes spent lonely nights in coastal towns so dreary they made Swindon look like Venice – can I say that? Sorry Swindon!

During all that, I had taken the decision to find a publisher so I could turn my travels into a book, and would you believe it, although they were responsible for the famous yachtsman’s bible Reed’s Nautical Almanac, Thomas Reed Publications operated from a farm in our own landlocked county of Wiltshire, just down the road near Bradford–on-Avon.

And so in September 1998 Rain Later, Good was published.

I wanted the RNLI to benefit from the sales, as they have to go out and clear up the mess when people don’t take proper account of the Shipping Forecast, so they had a royalty from each copy sold as well as me. After several reprints and a second edition, that £30 hardback coffee-table book sold enough copies to buy them the equivalent of two inshore RIB boats, of which most lifeboat stations will have at least one.

Now here I am, 15 years later still talking about it, because to my amazement the book is still going strong and a new revised and updated softback edition has recently been published, this time by Adlard Coles Nautical. At half the price of the original, it has already sold 7,500 copies since the middle of September and is still raising funds for the RNLI.

So, next time you hear the Shipping Forecast and, like me, wonder what’s out there, you now know where to look!

Rain Later, Good is available from Waterstones in Chippenham, as well as on Amazon, but if you would like a signed copy you can email me through my website www.petercollyer.co.uk