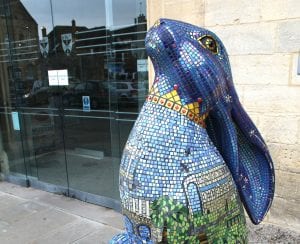 We’re pleased to announce that Queenie the Hilltop Hare, created by local artist Sue Steele, will be coming home to Malmesbury!
Bidders were overjoyed to have won the beautiful Hare at the charity auction on Friday 6th October. The hare, covered in tiny mosaic pieces, artistically depicts much loved scenes of Malmesbury. Residents in the town felt it was too beautiful to leave the town and quite rightly so!
Queenie was originally sponsored by Malmesbury Town Council and prior to the auction, generous donations were given by Malmesbury people to keep her. The bid donations, collected by Sue Poole ensured that the Town Council will assume formal ownership on behalf of the town.
Efforts certainly paid off, as Queenie will now take her place on permanent display in the entrance of the Town Hall. As Sue Poole, the former Town Council member trusted to make the bid states:
‘I can say officially that we managed to get Queenie at the auction. She was lot 84, so we had to sit through the previous 83 lots, getting more and more nervous! Such a relief when the hammer went down and we had won. Huge thanks to everyone who contributed….’
The Cotswolds Hare Trail
Going for auction were 104 hares in total, who, for the previous six months have formed the Cotswold’s Hare Trail, which closed on the 10th of September. The decorated hares were dotted around 28 towns and villages throughout the Cotswolds and were beautifully created and decorated from the combined efforts of artists and designers. The aim was to promote the Cotswold area as a hub for tourism, to support the cultural heritage of the Cotswold area and allow local school children to connect to their home region, through the inspiration of art. The trail was organised as part of the Cirencester March Hare Festival. This is a not-for-profit Arts Festival, with the funds raised from the project directed both to the National Star Charity who support young individuals with disabilities.
Queenie will certainly be receiving a royal welcome in Malmesbury after the hotly anticipated bid, providing a proud new addition to the town.
If you want to know more about what’s going on in the town, see  http://discovermalmesbury.life/