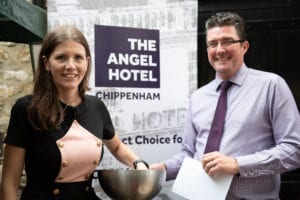 Chippenham turned out in force to celebrate the completion of the first phase of refurbishment of Grade II listed Angel Hotel in the town’s Market Place.

Michelle Donelan, Chippenham’s MP was one of many VIPs who attended two evening celebrations to learn about the upgrading of the hotel and who enjoyed entertainment from a steel band and made the most of a pop-up gin bar. Also attending was the town’s mayor Desna Allen and deputy mayor Teresa Hutton, and  Chippenham Chamber of Commerce President Debbie Williams.

Michelle Donelan MP commented “I was delighted to support such an amazing local event, you could really feel the community atmosphere.  It was great to view the facilities including the newly refurbished Gym and to witness such a significant and ongoing investment in one of Chippenham’s most well established landmarks.”

Members of The Rotary Club of Chippenham came along and more than £1260 was raised to support them in their work in the community. This was raised through a tombola and through an additional fundraising challenge with a team of staff and volunteers will be taking it in turns to cycle the equivalent of the 874-mile journey from Land’s End to John O’Groats.

Adrian Foster, Rotary Club President stated “We are thrilled with the magnificent sum of money raised by these fabulous events at the Angel Hotel, thank you so much for your support!”

General manager Philip Dunn, who has recently taken over management of the hotel, said: “We are so grateful to everyone who came along to have a look around and who helped us raise well over 1250 pounds for such a worthy local cause.”

Originally a 17th century coaching inn, The Angel has had more than £260,000 spent on upgrading its infrastructure to bring it into the 21st century and to reflect its historic status. More work is planned during 2019.

This first phase has seen much behind-the-scenes equipment being upgraded and there has been an up-to-the-minute refit of its gym which includes new equipment and digital wallpaper.

Master craftsmen have also restored the grand portico of the hotel, which is itself listed, using traditional techniques. Anyone interested in finding out more about The Angel can visit http://www.angel-hotel-chippenham.com