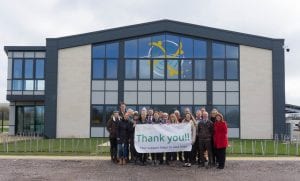 AN EXCITING chapter in the history of Wiltshire Air Ambulance has begun with the move into its new airbase at Semington, near Melksham.

The move to the new airbase co-incides with the successful conclusion of the charity’s major fundraising Airbase Appeal.

The custom-built airbase, at Outmarsh, will bring together the charity’s fundraising, administrative and operational teams under one roof.

The charity team were in rented offices in Calne while the helicopter and aircrew will move from a leased hangar at Wiltshire Police headquarters in Devizes.

The helicopter and aircrew are due to relocate permanently to the new airbase by the end of this month following a phased introduction of daytime and night-time flying. For the rest of this month, the helicopter will forward deploy to Outmarsh each morning, returning to Police Headquarters at the end of each day. It is hoped that the aircraft will be fully operational from the new airbase and permanently located there from early June.

David Philpott, Chief Executive of Wiltshire Air Ambulance, said: “Our new airbase at Outmarsh, near Semington, is something that we are very proud of and everyone who has raised funds for it should be equally as proud. The purpose-built facility will secure our future and enable us to continue saving lives for years to come.

“The response to our Airbase Appeal to raise the remaining monies to complete the build has been excellent. We’d like to thank everyone who generously donated, from individuals, community groups, schools to businesses and grant making trusts. People really got behind the appeal and raised funds in a variety of ways, including head shaves, long distance walks and skydives. Altogether, the Airbase Appeal raised in excess of £800,000.”

Mr Philpott said that because of good project management and cost efficiencies the total bill for the new airbase had come in well under budget.

He said: “Based upon professional estimates we originally thought the airbase would cost £5.1 million but I am delighted to say that the actual cost is nearer £4.25 million. This has been possible because our competitive tendering process resulted in the appointment of a very local firm – Rigg Construction (Southern) Limited – who have managed to achieve even greater cost saving efficiencies for us as the project progressed.”

He added: “Wiltshire Air Ambulance has been saving lives for over 28 years, but we have only been able to do that thanks to the amazing generosity of our supporters. Now that we have moved into our new airbase the challenge remains for us to raise the £3.25 million we need each year to keep operating our lifesaving service.”

With the move to the new airbase comes a new phone number – 01225 300536 – and the charity’s new address is Wiltshire Air Ambulance, Outmarsh, Semington, Wiltshire, BA14 6JX.

The charity is keen to point out that visits to the new airbase are by appointment only.

Kevin Reed, Head of Facilities and Security at Wiltshire Air Ambulance, said: “We know there is a lot of interest in the new airbase by our supporters and we are looking forward to welcoming them to it. We will be hosting a number of open days later in the year for them, including the local community of Semington and Melksham.”