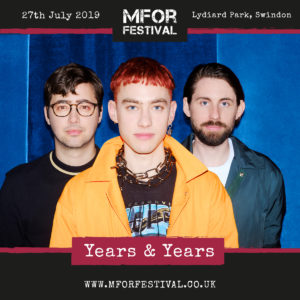 TICKETS for the first MFor Festival are selling faster than anticipated as the team behind this inaugural event confirm the full music and activity line up.

Taking place at Lydiard Park in Swindon on Saturday July 27 between 11am and 1o.30pm MFor will be both a music festival and a family-friendly community event.

Graham Stobbs, co-organiser and founder of Synister Music, said: “We’re so thrilled with the support we’ve already seen in ticket sales from across Swindon, Wiltshire and the surrounding areas – and also from local businesses and organisations – who are queuing up to support this unique community music festival.”

The music line-up features headline act Years & Years who will be appearing as part of their Palo Santo World Tour. Other acts include special guest Ella Eyre, HRVY, Becky Hill, Toploader and opening the music will be Swindon’s own Jahmene Douglas.  Jahmene will open the line-up at about 3pm and the headline act will take to the stage at about 9pm.

A second stage has now been included and there will be DJ sets, street dancers and other local music acts. One of those will feature local DJ Jay Hayden.

Co-organiser Debra Collins. “MFor is not just about the music, fun, family and community is at the heart of this great event and everything we do. Axe throwing, archery, crossbow, assault course, inflatables and so much more are included free to guarantee an exciting day for everyone. We are truly humbled by everyone’s support.”

Experiences on offer include climbing walls and a huge inflatable assault course, go-karting, a rifle range, axe-throwing, a funfair and a dedicated children’s area including activities such as face-painting, workshops and entertainment from street performers.

There will also be a food and drinks area (operating a Challenge 25 policy around alcohol consumption), community participation and a charitable element with money being raised for veteran charity Walking With The Wounded and other local projects. The Wiltshire-based Red Devils, the official parachute display team of the British Army will also be parachuting in at about noon.

Many businesses have already lined up support the event.  These include:

Farrs Catering of Swindon – for providing food vendors and a fun fair.

Graham said: “We would especially like to thank Tom Falding, Bailey Farr, Swindon Borough Council and Lydiard Park, who have really become part of the organising team and supported us in getting this first event off the ground.”

The MFOR Music Festival takes place on Saturday July 27. Gates open at 11am and the finish time is 10:30pm.

Ticket prices were tiered and now cost £37.99 per adult until the end of May. Children’s tickets are £12.99 (aged five to 13 inclusive) and must be accompanied by at least one full-paying adult. Under fives go free – one young child per full-paying adult. VIP tickets for fast track access and extra benefits are £70 each.  Information and tickets are available on the website at  https://www.mforfestival.co.uk